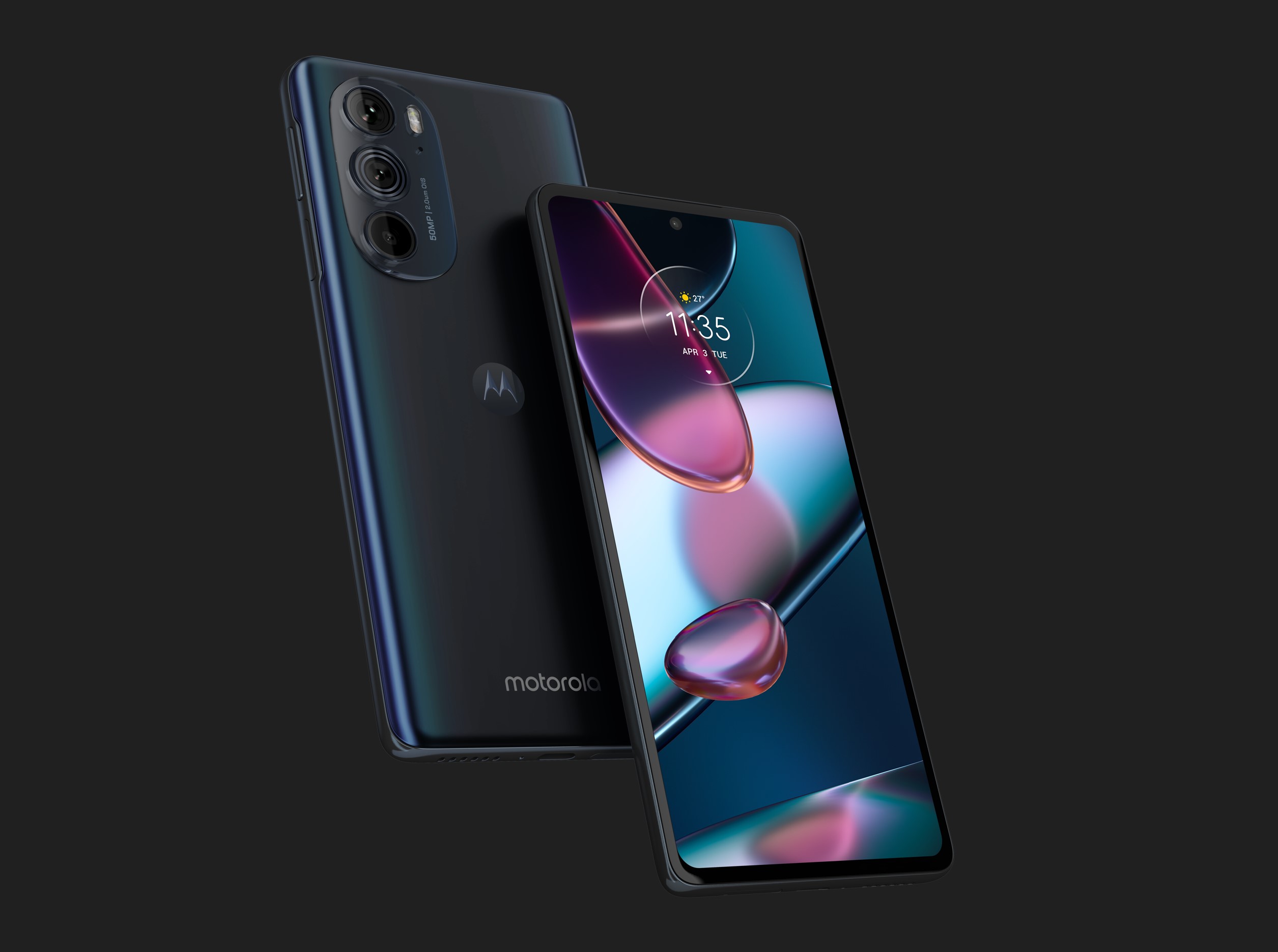 The Motorola Edge 30 Pro is a value flagship. If you are willing to accept a few minor compromises, it is a no-brainer, no-risk purchase over Samsung’s S22/+.

Motorola Edge 30 Pro is a king killer (first look) was our initial reaction. We want to change the king killer bit to value flagship king. Frankly, even if I had $1549 for the Samsung S22+ (8/128GB), I would have to ask why I needed to spend more than $999 for a phone with the same processor, ram/storage and a larger, better screen, camera, etc.

Pre-orders are open now at JB Hi-Fi until next Wednesday, 30 March. All pre-order customers will receive a bonus Lenovo Smart Clock with Wireless Charging Dock (valued at $109).

It is now in two parts – a five-minute overview for most readers and a separate 300+ line database-driven spec including over 70 tests to back up the summary. It also helps us compare different phones and features.

Given the rain, we will update the photo segment as soon as we have some sunshine.

This is exclusive to JB Hi-Fi but will roll out later to Motorola approved retailers (Kogan is not one). Look for the RCM C-Tick on the box end, and under Settings, About Phone, Regulatory Labels. The only memory/storage option for Australia is 8/128GB.

We issue a strong warning that you must buy a genuine model with Australian firmware if you want to use 5G. Read Don’t buy a grey market phone to ensure you get the Australian model.

While we covered that in our first, albeit brief look, we have had more time to play! I like the rear Gorilla Glass 5 Cosmos Blue, where the colour changes from deep blue to turquoise in the light. Unfortunately, it and the camera housing are fingerprint smudge magnets.

The camera hump is not too high, but it rocks if placed on a desk. The solution is to use the bumper case to protect it and the lenses.

On the right side are the fingerprint/power button and volume rocker. These are high up, and that may limit on-handed use. The top has an earpiece speaker and a mic. The selfie is O-hole style in the top centre of the screen.

Overall a very pleasing design  (for a glass slab), and don’t let the plastic frame bother you (the Samsung S22 uses one too) – it is polycarbonate and quite strong with no flex.

It is a pOLED screen (AMOLED is a Samsung trademark) with a Gorilla Glass 3 cover. It is capable of 700nits (in 2% of the screen) and 500 nits (at peak brightness). We tested about 10% below the claims. By comparison, Samsung S22/+ are a little brighter.

Is it a better screen? Technically, it wipes the floor over the Samsung S22/+, but the Samsung appears slightly brighter.

It is the same processor as the Samsung S22-series. We can say that the Motorola Edge 30 Pro performs similarly to other brands’ SD8 Gen 1 benchmarks.

While the SoC is 4nm, it does run hotter. It throttles 27% after five minutes, but the good news is that this is the lowest it gets. Motorola does not throttle its apps like Samsung flagships throttle 10,000 apps – user discovery prompts action, so comparisons are odorous until Samsung offers a fix.

Excellent Wi-Fi speeds out to 10metres (the maximum distance of 5Ghz)  but is slightly variable. Sometimes it would swap to the 2.4GHz band, and I suspect this is just an early firmware issue. These generally exceed the Samsung S22/+ speeds.

The USB-C 3.1 port supports Display Port 1.4 for audio and video streaming and Moto’s Ready For Android desktop. You can use Miracast as well, and it also supports Chromecast for screen mirroring.

It has all 4G and 5G sub-6GHz and Low-band support. Note that international grey market versions don’t support Optus n40 – another reason to buy genuine.

It found the closest four towers (Samsung S22/+ only found two). It has excellent signal strength and should be a good city, suburbs and regional use phone.

First, it comes with a 30W charger and fills in around an hour. It is also 68W capable if you buy a USB-C GaN 65W or more charger and a 5W USB-C cable (the supplied cable only handles 3W).

The 68W charge time reduces by 15 minutes to 44 minutes. That beats the hell out of the Samsung S22/+ 25W charger that takes 1 hour and 36 minutes. Samsung has an optional 45W charger, which reduces the time by about 10 minutes.

It is also 15W Qi wireless compatible and charges in about 4.75 hours. It has reverse 5W charging for smartwatches etc.

We had a mixed bag of results – some excellent and others variable.

The not so good was 100% load screen-on drain time of just 2 hours and 15 minutes. The Samsung S22 (with its undisclosed throttling) achieved 4 hours and 32 minutes. But we expect it would be similar to the Motorola Edge 30 Pro if the throttling were off.

So the moral here is we expect the Motorola results are accurate. Battery life is a hard call. If you are a power user, it will last around 12-15 hours. A typical user will get 18-24 hours.

Sound – not so good speakers but excelent USB and BT

It is an extreme analytical sound signature (bass/mid recessed; treble boosted) – crisp but not pleasant for most music. Apart from sounding muddy and dull (as there is no bass), it has no character, directionality or verve.

We tried with and without Dolby Atmos EQ, and the white noise generator gave the same results. We suspect it is to do with Moto’s Crystal Talk AI to clean up voice between 1-4kHz, and it does that at the expense of all else.

You can read more, including using our test tracks – How to tell if you have good music (sound signature is the key – guide.

Fortunately, the supplied USB-C earphones are great. It has an abundance of codecs from SBC and AAC to most aptX and LHDC – excellent. Our test headphones worked on all Codecs.

Never mind about the plastic (polycarbonate) frame as the Samsung S22 has one too. It is very well-made and should be a keeper. Warranty is 1-year (same as Samsung) which we think should be longer – OPPO and Google offer 2-years.

It ships with Android 12 and Motorola’s overlay My UX 3.0. You can reasonably expect Android 14 and two years of updates.

Android is almost pure, and the MY UX adds things like a camera app and Moto gestures. See table for all features.

It is an interesting choice to use the 50MP Omnivision OV50A as the primary wide sensor and the 50MP Samsung S5KJN1 as the secondary ultra/wide sensor. We would have expected two of the same sensors but it works.

The camera app is pure Google Camera 8.4 features (not all features are supported)

It is the same that runs on Google Pixel phones.

Camera summary – a great setup that is commensurate with flagship status.

At $999, it presents superb value, and sorry to keep referring to Samsung, but it is better than the S22/+ that, cost a lot more. Add to that Ready For and great screen casting options.

Apart from the poor speaker sound and IP52, there are no issues or impediments. It gets our unreserved ‘buy’ tick.

A full rating explanation and pros and cons are at the end of the table below.