Creative SoundBlaster Katana V2 is a wicked 2.1 soundbar and we love it (review) 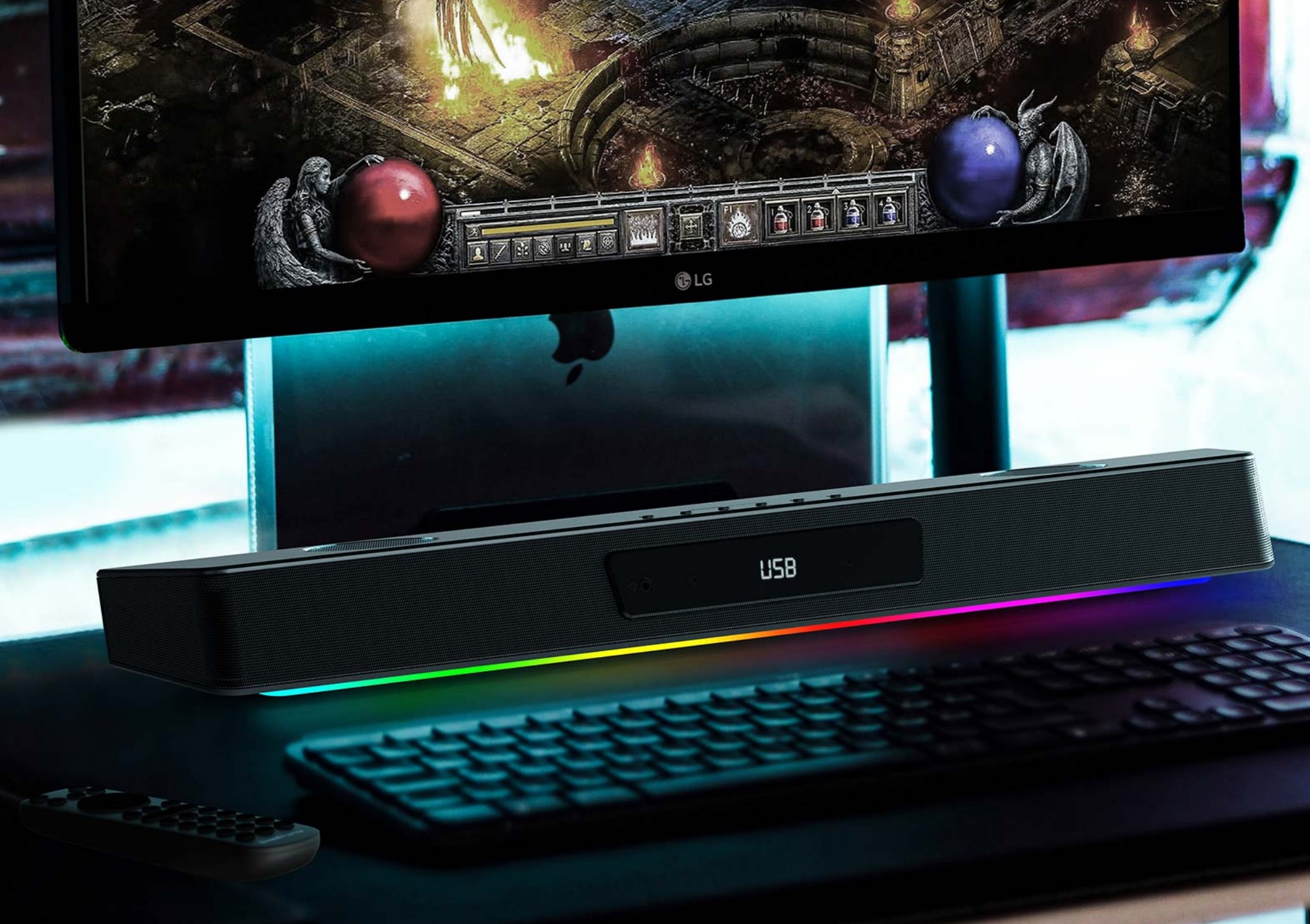 The SoundBlaster Katana V2 is a wicked soundbar (in such a good way). It is loud, has low distortion and has several inputs, including HDMI ARC.

I like Creative SoundBlaster gear – it never ceases to surprise me with fully-featured products at often insanely low prices. The SoundBlaster Katana V2 has everything a PC (or mac) enthusiast wants and sounds good enough to compete with brand name soundbars at higher prices.

In fact, on that front, its sound signature is fantastic – a neutral blank canvas. You can feel it from about at 50Hz, where it is solid and flat (good) right through the sound spectrum to 20kHz. More later, but this is highly unusual for soundbars (again, in a particularly good way).

It is angled back so the RGB lighting can shine underneath. The Aluminium chassis has an acoustic metal grill and an LCD front panel that displays the source and mode (music effect).

The sub-woofer can be placed anywhere on the floor – as long as the cable reaches it (and you could buy an extension female RCA to male RCA cable).

Finally, there is an IR remote with customisable shortcut buttons.

There is also a USB-A report specifically for Creatives SXFI-out via a dongle.

It is plug and play with several onboard presets/modes. It does not need an App, but you can download the Creative App for Windows or macOS that adds even more features to the onboard feature set of movies, gaming, and effects on/off.

There is an SXFI app. It maps the head and ear and allows you to experience audio as if it is coming from outside the headphones. Regrettably, the only two user comments are one-star so consider this work in progress.

The Acoustic engine has settings for surround (psychoacoustics), as the artist intended (hence the flat neutral sound signature), smart volume (for night TV watching) and dialogue for Crystal voice clearer sound (typically for 3.1 systems, but it seems to make quite a difference).

There is a customisable EQ for the various modes and several music genres, including one curiously called Footsteps enhancer.

There is also a basic mixer desk.

My take – you really need to be a nerd if you want to venture into this App. Fortunately, there is a reset button to undo any Frankensound mistakes.

We know sound quality – How to tell if you have good music (sound signature is the key – guide), and this has it in spades. All our tests were at default settings, and as you see, the App has incredible flexibility.

Maximum volume depends on the connected device. Smartphones tap out at 80dB, PCs at 85 or more dB and gaming at 90+dB. It is usable sound – no evident harshness (in fact, it slightly recesses the 6-8kHz band to do that).

Our white noise generator verifies frequency response is 50Hz to 20kHz. That means you get all the critical bass (and you can feel it via the sub-woofer, very strong mid and low treble, recessed mid-treble to remove harshness and then strong upper treble that adds vitality and sound direction.

The sound stage is massive – a good meter on either side of the soundbar. Playing 5.1 is quite good, with well-defined psychoacoustics surrounding you with sound.

CyberShack’s view – the Creative SoundBlaster Katana V2 is a wicked

No, make that an astonishing, small form factor soundbar with big aspirations. It is not just a PC, Mac, laptop or even a gaming smartphone upgrade. It is better than that.

Maybe it is because I mainly tested using USB-C with this on my desk – barely a meter away from my ears – but the quality of sound, the 2.1 or expansive 5.1 sound stage, and the neutral sound signature impress me. Yes, it is that good.

When tested with a TV (HDMI ARC), it filled a decent sized room (10 x 10m), and the settings for 5.1 Dolby Audio were excellent. Clear dialogue (especially for the hearing impaired) challenged the best any 3.1 or more system could provide. The only issue is that you need to set this up in the App and download it to the soundbar.

Bluetooth has SBC and AAC codecs. Its Creative Digital Signal Processor cleans that up for decent BT streamed music, although mid-bass is a little more recessed.

Our take – Perfect for gamers. Buy it for your PC but don’t forget its excellent TV and music credentials.