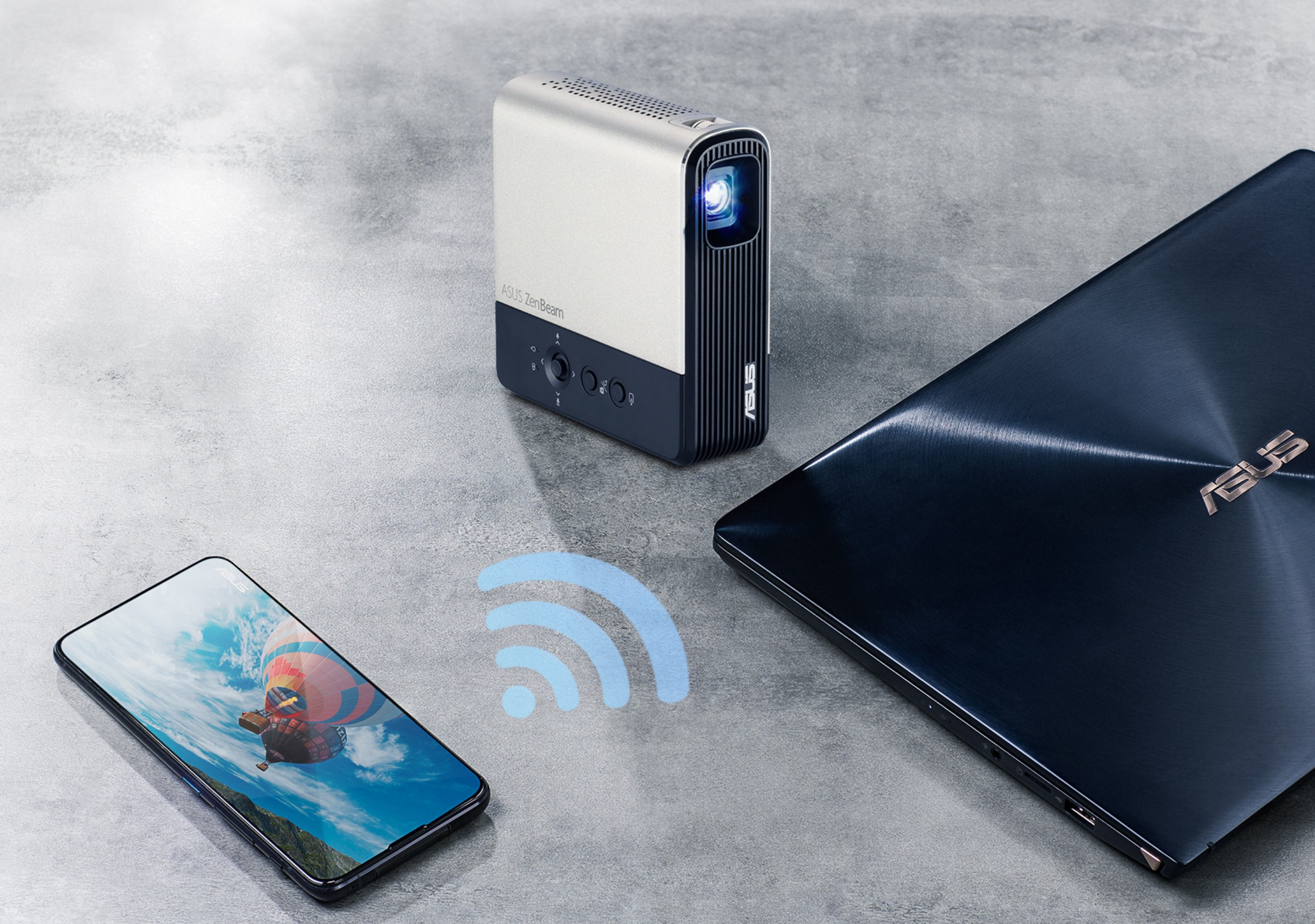 The ASUS ZenBeam E2 is a mini-LED ultra-portable projector with an inbuilt battery, 5W speaker and an EZCast Miracast dongle.

It is one of the new breed of DLP mini-LED projectors offering big-screen opportunities on the go. This happens to be one of the smallest at 110 x 39.5 x 107 mm x 410g and even has an internal battery and a nice fabric carry sleeve.

What is a DLP mini-LED projector?

Before we get carried away, there are a few things you need to know about all DLP mini-LED projectors. The Texas Instruments DLP mini-LED unit is in almost all the small LED projectors. We have seen many of these and know how these perform – what the upside and downsides are. Upsides – allows for lower-cost, smaller projectors. Downsides – single-chip colours are never good, and they simply don’t work unless you have a dark room.

That is all of them, so don’t let marketing hype tell you otherwise. These should not put you off but make you aware of their limitations and best use. We will highlight these in the review.

First impression – this is tiny

In this case, its mini size packs in an internal 6000mAh battery (that is about 30W for an hour), 5W mono speaker, and even an emergency light beacon/torch feature.

On the back is an HDMI 1.4 (not ARC), 3.5mm 3-pole headphone/speaker out, and an EZCast Wi-Fi Miracast dongle port. While this port is USB-A, it does not support flash drives; it can provide 5V/1A/5W power to an HDMI streaming dongle.

Underneath is a ¼” tripod socket (that you may find extremely handy for mounting) and an adjustable foot that provides about 12mm (40°) lift.

Miracast is a peer-to-peer Wi-Fi network (often called Wi-Di or Wi-Fi Direct) specifically for transmitting (one-way) content on one screen (PC, Mac, Smartphone) to another screen or a projector. Most devices support it, and it is often-called screencast. It is like Android Chromecast, but the two are different methods of doing the same thing.

Or add a Google TV (Chromecast with Google TV 4K review) or Amazon Fire TV Stick 4K Max – For Amazon lovers (review) dongle to the HDMI port. If you use the $99 Google, you also get Chromecast (Highly recommended as you get Netflix, Prime, Disney+, all digital TV channels and more).

There is no App – plug in power, connect the HDMI cable (or Miracast) to a video source, and turn it on. The default settings should auto-keystone correct.

Resolution – it is about half the quality of 1080p.

ASUS claims 300 LED lumens (not nits) and 400:1 contrast (typical), which means blacks are grey. You need at least 200 nits and 1500:1 contrast before you see any semblance of black. OLED TVs, for example, have 1000 nits and infinite contrast as it is pure black and pure white.

It can display 8-bit, 16.7m colours and 100% NTSC colour gamut, which is a really old-fashioned way to describe coverage. It is about 70% of DCI-P3 movie gamut, which is fine.

What are Lumens anyway?

All brands quote unrealistic brightness figures. Technically you divide LED lumens by 2.4 to get ANSI lumens (another rubbery figure for the supposed light output). Then to convert to Nits (brightness at the screen or candela per square metre – cd/m2), you divide that by 3.426 (which varies according to the throw distance).

ASUS claim 300 LED lumens which is the same as 125 ANSI lumens output or 36 nits at the screen.

For any device to be ‘readable’ and project any semblance of colours, it needs to exceed ambient light levels.

Add in resolution (HD/FHD/4K), contrast (difference between the darkest black and whitest white), the number of colours, % of movie gamut (DCI-P3), and refresh rates, and you can see there is a lot more to projecting an image.

It can be placed in front of a screen, behind it (if the screen is translucent and it will lose significant brightness in that mode) and projected in landscape (16:9) or portrait (9:16 TikTok) mode. You can project onto the ceiling, but the rear cable ports make that difficult unless you use a tripod.

But here is the real issue affecting all low-powered mini-LED projectors – painted walls and cotton sheets absorb light (negative gain sucks the life out of the image). Some projectors have settings for different wall colours – this does not. If you want the best image, you need to buy at least a neutral gain screen – for every lumen it receives; it reflects a lumen.

The 5W speaker is way too small for decent sound, and if you drive it at over 70% volume, it has noticeable distortion (100% volume is about 80dB).

It has a 3.5mm 3-pole headphone output that you can connect to an AUX-in speaker. But the best option is to connect an external sound device to the content device via Bluetooth, and that way, you can get stereo as well.

Battery life – good for one movie

ASUS claims the 6000mAh battery lasts 4-hours on a 5-hour charge. Those figures are at 50% brightness, Wi-Fi off, and frankly, we were hard-pressed to get much more than 2 hours at 100% brightness with Wi-Fi Miracast. As long as you are aware of this and realise that most similar projectors don’t have an inbuilt battery, then treat the battery as a bonus.

At idle, it consumes .3W, on 50% brightness 12W and at full brightness, about 17W (from a 30Wh battery). Considering power costs about 30 cents per 1000W, this has negligible running costs.

< 40-lumen room (dark), 100% (10) brightness gives an acceptable image although colours are very undersaturated, there is no black (it is grey) and no definition in the highlights or shadows. The light meter shows 30 lumens at the screen.

Nowhere is ‘you get what you pay for’ truer than with projectors. Mini-LED projectors start at a few hundred dollars and top out at around $1500. As you pay more, you get stereo speakers, built-in Google TV (or similar) and 1920x1080p resolution.

So, let’s look at the (not so) bright side. A one-hundred-inch screen is impressive. Who says size does not matter? Completely darken the room, and the colours are acceptable (not picky, but they are a long way off an LED/LCD TV). And you can add Android TV with Chromecast (via a $99 Dongle) and its extensive range of apps.

Should you buy one?

Mini-LED projectors are ideal for grey nomads and places where you need a large, quasi-acceptable image for the least cost. As long as you know its strengths and weaknesses, we have done our job.

Note the images shown on the screen in the video are simulated. Ours above are realistic.

Previous Post Microsoft Surface Laptop Studio (2022) – a thing of beauty and envy (review)
Next Post Do you want a charger with that? The demise of inbox accessories (opinion)