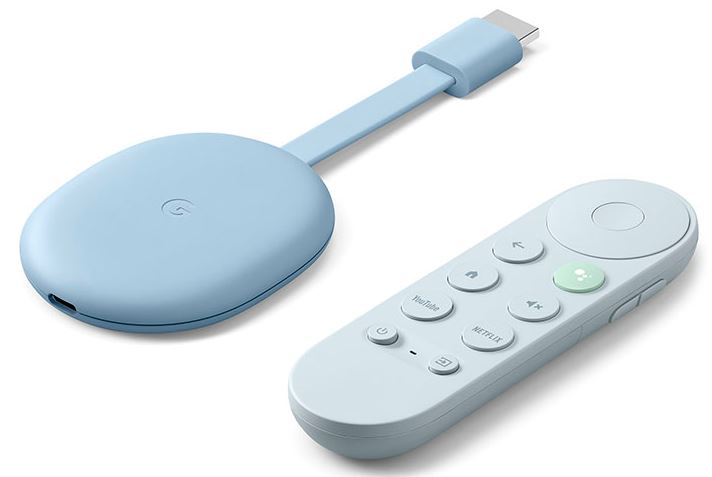 The year’s hottest must-have item to enhance your TV viewing pleasure is a streaming dongle.  Chromecast with Google TV 4K is one of the better options to add more intelligence to a dumb TV or to get streaming channels your smart one is missing.

Now you have considerable choice of internet streaming devices

The key issue is to check that whatever you buy supports the apps you need. For example, Foxtel channels, including Kayo and Binge, are hard to find. The new Paramount+, Apple TV+ and Disney+ may be missing from many dongles.

First impression – Google has been playing with chalk again

Chalky Blue (Sky), Pink (Sunrise) and white (Snow) – a nice take on modern Google Design Cues. But as this sits behind a TV or monitor, you only see the matching remote.

It has a flexible HDMI cable, so it fits well anywhere – unlike candy bar sticks with HDMI at one end.

It requires USB-C Power – at least 5V/2A/10W and has an adapter and cable in the box.

Setup – easy if you have a Gmail address

Plug it into power and a spare HDMI port on a 1080p or 4K monitor or TV. It will run you through the setup – you need a Google Gmail account. Unlike Fire TV, it does not require a credit card, although you can make in-app purchases.

The remote links via Bluetooth, so it does not need a line-of-sight to work.

It pre-loads most popular Australian TV streaming apps YouTube, Netflix, Spotify, Prime Video, Disney+, Stan, YouTube Music, ABC iView, 9Now, 7Plus, SBS OnDemand, 10 play. There are hundreds more on the Google TV App store. Check before you buy if it has the apps you want, and yes, it has Foxtel, Kayo, Binge, Paramount+ and many more. The chances are that it has everything you need.

And if it does not, it supports 1080p Chromecast, so you can stream from your Android phone.

Google TV is the latest version 10 of Android TV (that goes to Pie 9), and It is a nice layout with more intelligence to help recommend based on what you have watched.

Search is also across all installed streaming apps with no favour for a steaming service (unlike Amazon Fire TV).

It also supports OK Google, and again the searches are not influenced by a store trying to sell you its content. It can act as a Google Assistant Hub for smart home integration.

There is parental control and the ability to limit it to kid-friendly content via profiles.

It has an Amlogic S905X3 processor – as in many Android TV OS dongles and set-top-boxes.

That means the potential for 4K@50Hz (60Hz is for other countries), although most of the time, it is 4K@25Hz – the TV handles that.

It is HDMI 2.0 ARC, but you are likely using that port to connect a soundbar, so don’t expect it to control TV power, volume, etc.

Wi-Fi is 5 AC dual-band to a maximum of 866Mbps half-duplex. In tests, it will stream 1080p@60Hz content at up to 10 metres from the NETGEAR AX11000 (currently the most powerful router available here). It will stream 4K@50Hz (60Hz is for other countries) at around 5 metres before it drops back to 4K@25Hz – the TV handles that well.

You have to remember that reliability is more about Wi-Fi quality than hardware. When it was streaming 4K content, there was an occasional lag when it filled its buffer – maybe once or twice in a movie. When streaming 1080p is was rock solid. It can also stream music, and it was perfect. Hardare-wise – glitch-free.

The TV plays the DV to its panel’s capability. It is HDMI 2.0 HDCP 2.2 and may not stream at 50fps (likely 25fps), but the TV will handle that OK. Sound is either processed via the TV (usually with 2.0 or 2.1 inbuilt speakers), and the DA is down-mixed to that – you don’t get 3D spatial DA.

It does not provide as immersive sound as true DA can.

Chromecast with Google TV 4K ticks all the boxes – the widest range of apps, Chromecast, and not trying to sell Google content etc.

I would suggest that if Wi-Fi is an issue, you get a lower-cost USB-C power pass-through dongle with Ethernet. Care – you need a higher wattage power supply to cover the Ethernet dongle and Chromecast TV dongle.

Overall it’s a trouble-free way to add up to 4K streaming to a dumb or smart TV. Its arch enemy competitor is Amazon Fire TV Stick 4K Max, and while both are similar, this is well ahead on Apps and Chromecast.