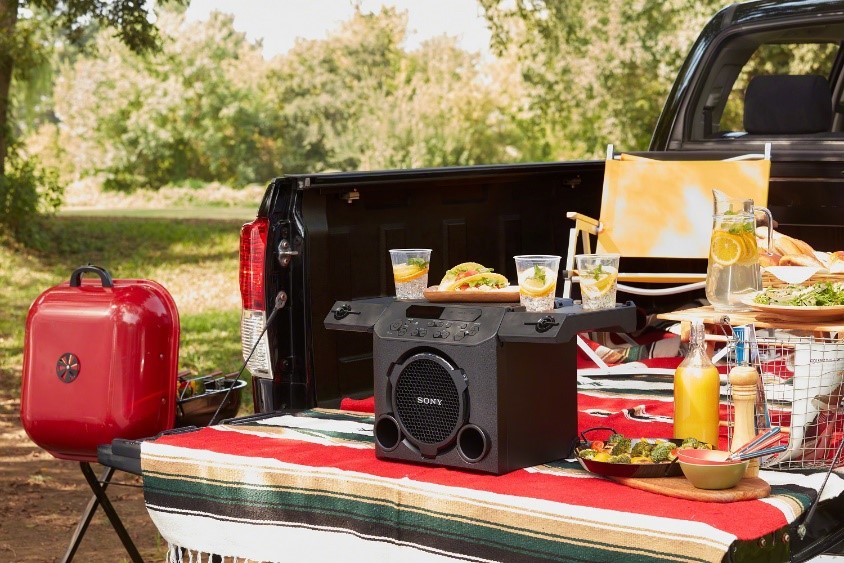 Sony has added a long list of audio products to its portfolio this year with a series of portable speakers, two new sound bars and a Bluetooth turntable.

Three small portable speakers in the EXTRA BASS line will become available from April to May including the SRS-XB12, SRS-XB22 and SRS-XB32 wireless speakers. Sony promises these speakers deliver punchy low-end frequencies with passive radiators and stereo speakers. All three are water and dust resistant and feature carry handles, as well as battery life up to 24 hours. The EXTRA BASS line ranges from $79 for the XB12, $159 for the XB22 and $229 for the XB32.

Four larger party-oriented speakers are coming in April with the MHC-V02, MHC-V42D, MHC-V72D, and GTK-PG10. The MHC series speakers are large all-in-one stereo systems with lighting and sound systems, delivering noise-complaint-worthy levels of high quality audio to any party. The GTK-PG10 is a smaller battery powered system intended for tailgating or barbecuing and offers the interesting inclusion of a top-mounted drink tray with cupholders and a splash guard for storing up to four drinks at the party.

A Bluetooth turntable is also on offer from May, iterating on Sony’s old-meets-new turntable philosophy. Previous models supported USB connection for digitising records, while the new model is intended to connect to wireless sound systems directly. A wired connection with phono preamp is also available in case you can’t stand the Bluetooth compression of your beloved record collection. The PS-LX310BT turntable will be available for $299.