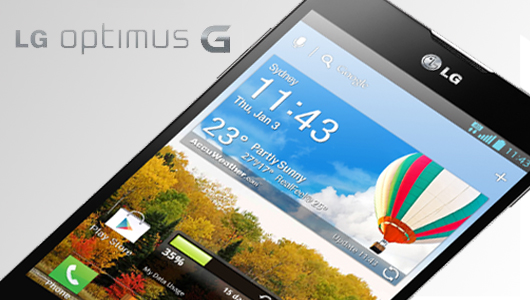 LG dubs the Optimus G as the best phone the company has ever produced and represents the very best that LG offers in terms of innovation and technology. The Optimus G has a powerful quad-core CPU, Snapdragon S4 processor with 2GB of DDR RAM and 32GB of on-board storage.

The Optimus G also comes equipped with other LG exclusive features including the QSlide function which allows the phone to show up to 3 apps simultaneously on one display, Dual Screen/Dual Play which not only allows mirroring between the smartphone and a compatible TV but also has the ability to display different content on the TV and the phone screen.

There’s also QuickMemo that allows users to capture screen images and write or draw a memo with their finger directly on the captured image, Live Zooming which enhances the video-watching experience as users can zoom in to five times the original video picture as it is played.

LG has also added a few improvements on the camera UI including Time Catch Shot, a feature that allows users to take a series of shots, with the phone buffering and holding images prior to the shutter button being pushed. Then there’s the Smart Shutter and Cheese Shutter. The Smart Shutter senses camera vibration of the movement of the subject and adjusts the shutter speed for the best shot while the Cheese shutter makes use of voice activation technology to capture images.

The Optimus G is available exclusively on the Telstra network for $0 upfront on the $60 every day connect plan (minimum cost of $1,440 over 24 months). It will also be available for purchase at Telstra stores, Phone Zone, Leading Edge and JB Hi-Fi retailers.