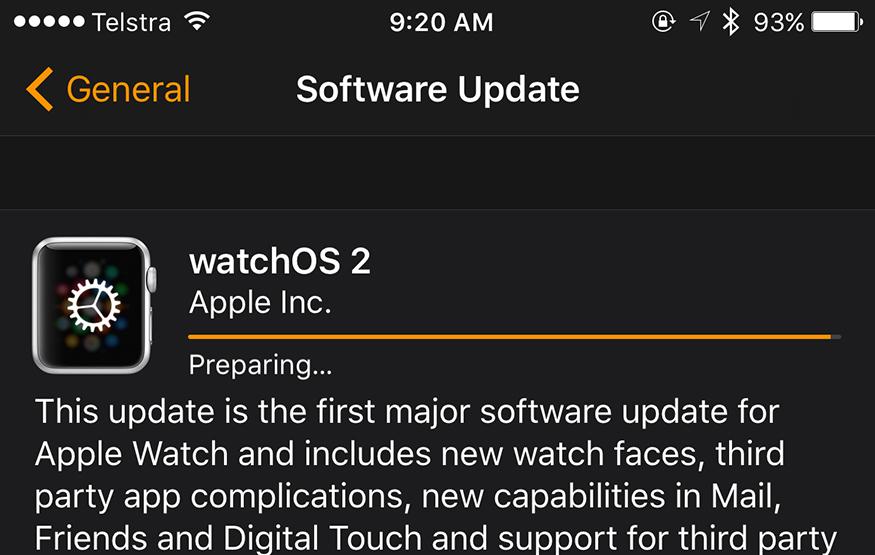 watchOS 2, the first major update to Apple's smartwatch operating system, is now available as a free download for Apple Watch owners. The new operating system was originally scheduled to launch alongside iOS 9, but was delayed due to a bug discovered at the last minute.

The biggest change in watchOS 2 is that the Apple Watch will now be able to run native applications directly on the wearable, rather than offloading processing tasks to a paired iPhone.

"We are opening a new platform to developers to create new applications that can really change people's lives," said Apple CEO Tim Cook, introducing the update at WWDC 2015 in June. "We really deeply believe in this space, we believe in technology designed for the wrist. We believe that by opening up the platform, you will create new and powerful uses that today we can only begin to imagine."

Native Apple Watch applications will allow developers to access functionality such the wearable's microphone, taptic engine and speaker. Apple also said that native applications will load much faster, addressing one of the major issues with third party apps when the Watch launched earlier this year.

In addition, watchOS 2 allows developers to build third party complications for the Watch's face, enabling it to display information such as flight times, sport scores or the charge level of an electric car.

watchOS 2's other big new feature is called "Time Travel". When on the device's home screen, Watch-wearers are able to use the Digital Crown to scroll back and forth through time, allowing them to see past and future appointments, in addition to information such as weather predictions.

Apple Watch owners can update to watchOS 2 by opening the "Watch" app on their iPhone, selecting "General", and then tapping "Software Update". iOS 9 is required to download the update. watchOS 2 is approximately 500MB when installed over-the-air. To install the software, the Apple Watch in question needs to be plugged in and charging.