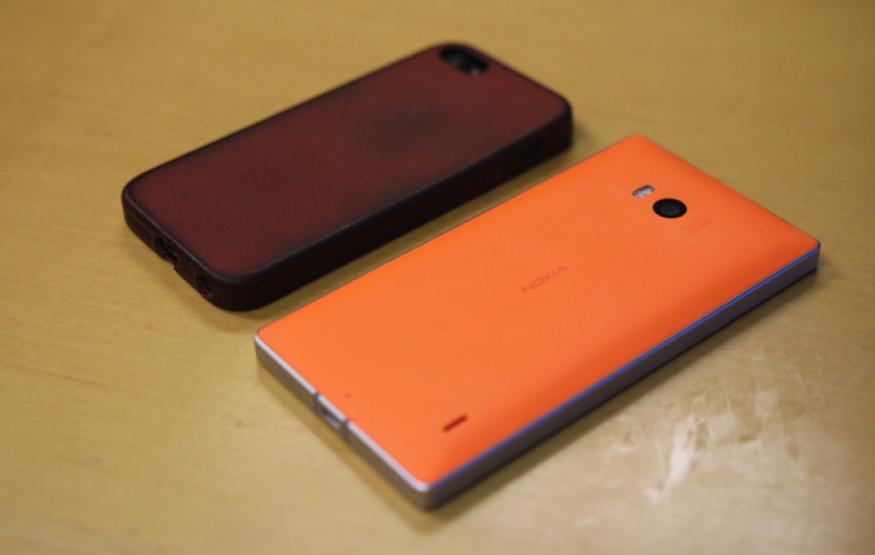 The Nokia Lumia 930 is a pretty slick looking phone. While I've mostly been an iPhone (and occasional Android) user, I've heard almost nothing but praise for Lumia flagship phones. As such, I decided it's time to ditch the iPhone for a week and give Windows Phone 8.1 a proper road test.

The Nokia Lumia 930 is a pretty slick looking phone. While I've mostly been an iPhone (and occasional Android) user, I've heard almost nothing but praise for Lumia flagship phones. As such, I decided it's time to ditch the iPhone for a week and give Windows Phone 8.1 a proper road test.

From today until next Wednesday, I'll be using the Lumia 930 as my primary mobile phone and giving a proper road test. I'm a little anxious, but excited at the same time! The iPhone has been primary device for so long, that it's almost hard to imagine using anything else. We'll see how I go! Here's a recap of day one so far.

First things first, I'm a big fan of the Lumia 930's industrial design. I received an orange review device, so it's very much like a mullet: business at the front, party at the back. It's a few millimetres thicker than the iPhone 5, and roughly the same size as the Nexus 5. It's also a much heavier phone than both, but despite this, feels good to hold.

Setup was simple; the steps involved were entering my PIN, connecting the WiFi and logging into a Microsoft account. Opening the mail app allowed me to plonk in my Exchange details and I had my contacts and calendars almost instantly. I was then able to add a second email account through the settings page.

I loaded up the Windows Phone equivalent of the app store, and the only thing that's really missing for me is my bank's app. It's a bit inconvenient, but at the same time it's not something I check every day. All of my daily use apps are available on Windows Phone, Facebook, Twitter, Instagram and TripView.

Before I continue, I have to say this: the Lumia 930's 5" 1080p screen is absolutely gorgeous. There's not a single pixel in site.

I've been fairly pleased with the experience so far; aside from a few learning curves in terms of getting used to placement of certain buttons (such as send message), it's been a fairly seamless transition from the iPhone to the Lumia so far.

My biggest concern isn't actually the Lumia's fault; it's Apple's. It's iMessage. Despite disabling it on my iPhone before swapping my SIM over, I wasn't receiving messages from other iPhone users on the Lumia 930. I remembered that while I have iMessage disabled on my MacBook and iPad, my phone number is still associated with them. I ended up having to go into a the backwaters of Apple's support portal and remove an old iPhone from there. Honestly, I'm still not 100% sure if all my messages are coming through. It's no wonder Apple are facing a lawsuit over this in Europe.

I'm pretty impressed with how customisable the home screen is, and a little ashamed about how much time I spent personalising mine. Tiles can be made one of three sizes, and based on that will display different information. For example, I've given my inboxes larger icons so I can get a sneak peak at my emails, whereas I've made my contacts icon the smallest size possible, because I don't really need any live information from there.

I don't have too much more to add today, and aside from the hurdle with iMessage, I'm looking forward to see how the rest of the week goes.

If anyone has any questions, please feel free to ask on the comments section, Facebook or Twitter!

Update: Here's a link to day 2

Previous Post Weekly App Round Up 9/07/14
Next Post Trend Micro: Nearly half of Australian children begin using mobile devices from the age of three