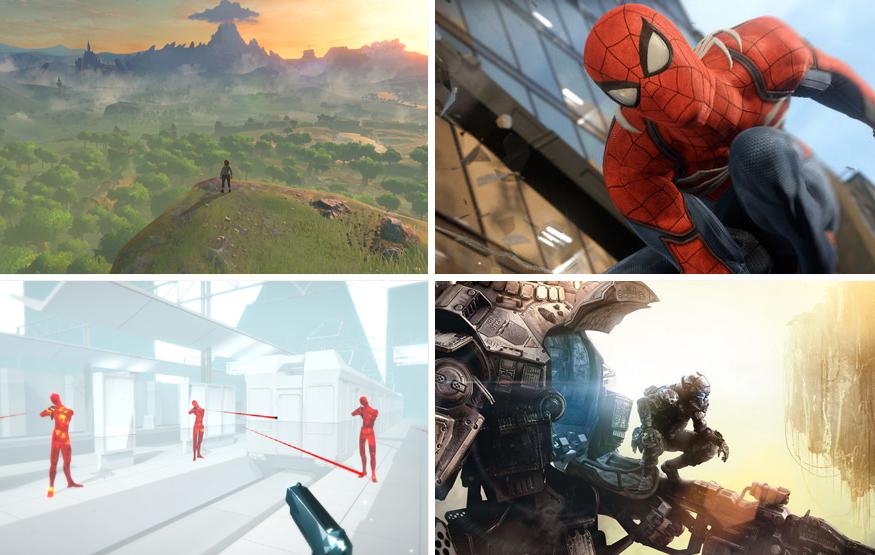 We've seen a lot of gaming news come out of E3 – the world's largest gaming tradeshow – this week, and it's got us pretty excited about what's to come. Here's our pick of the best from this year's show, including newly announced titles and previously unveiled games we got a closer look at.

Nintendo's been teasing a Wii U Legend of Zelda since 2013, but has only just gotten around to revealing much about the game, including its name. Breath of the Wild looks to the freshest Zelda title in a long time, shaking up the tried and true formula with more than a few twists. Arguably, the biggest is the transition to an open world environment, giving players a lot more freedom as to how they progress. The game will also drop players into the world with little to no instruction, and instead rely on gamers exploring at their own pace.

The original Titanfall was a promising title somewhat hampered by an online community that dwindled a little too fast. It was a first person shooter where players alternated between playing as a highly mobile soldier, and as a super-powered mech (referred to as Titan). While Titanfall had a lot of cool ideas, it didn't have much longevity due to its small player base.

Titanfall 2 is set to refine what made the original enjoyable, while adding in a single player mode, a class-based approach to Titans, and a new matchmaking system that makes it easier to find a group to play with, even if one's friends don't have Titanfall 2.

Horizon: Zero Dawn is a third person, open world action RPG set about 1,000 years in the future. You hunt robotic dinosaurs with a bow and arrow. That sounds pretty damn cool to me.

Open world racer Forza Horizon is making a return this September with a third instalment, this time set in Australia. Even though I'm not a huge game of racing games, I really enjoyed Forza Horizon 2, and Forza Horizon 3 is said to offer a bigger world, more cars, and crocodiles. Fingers crossed we see a car or two from Mad Max.

Resident Evil 7 promises to return the long-running series to its horror roots, abandoning the action-based gameplay that featured in recent instalments. Instead, players can expect a slower-paced claustrophobic, first person experience that blends exploration, puzzle-solving, combat, and more than a couple of scares.

Notably, the entirety of Resident Evil 7 will be playable using the PlayStation VR virtual reality headset.

The Surge
Xbox One, PlayStation 4, Windows
2017

The Surge is a Dark Souls-inspired take on the sci-fi genre, by the developer of Lords of the Fallen, another Dark Souls inspired game. Set 70 or so years in the future, The Surge puts players in the control a man wearing an upgradeable industrial-grade exoskeleton. In addition to fast-paced combat with aerial options, players will be able to target enemy limbs and cut them off to steal their technology.

Insomniac, best known for Ratchet and Clank and Sunset Overdrive, has been tasked with rebooting Spider-Man as a video game franchise. The game will offer a standalone story, independent of the current Marvel cinematic and comic book universes, and instead feature an older, more experienced Spidey. To date, little has been revealed about Spider-Man's game, but given how fluid combat and movement were in Sunset Overdrive, I think we're in for a treat.

Bound is a highly stylised procedurally generated platformer where players take the role of a dancer trying to defeat a monster that's "ruining the world". Developer Plastic describes Bound as a "notgame"; the focus is on exploring a vivid world and progressing through the story. There's puzzles, but they won't make you pull your hair out. There's no user interface, there's no "set" tasks. At the very least, Bound should be a feast for the eyes.

Bound will be updated to support PlayStation VR when the headset launches later this year.

Oxygen Not Included is a space colony simulation game from Klei Entertainment, the makers of Don't Starve, Mark of the Ninja, and more. While details are pretty scarce at present, players will help colonists build and maintain a subterranean asteroid base. Given the developer's pedigree, that's enough to get me excited.

Superhot is a stylised first person shooter that plays almost more like a puzzle game; time slows down whenever you stand still. As the name might suggest, Superhot VR is a reimagined, redesigned take on the game optimised for the Oculus Rift. Superhot VR will take advantage of the upcoming Oculus Touch controllers, allowing players to dual wield guns or fists.

Battefield 1 doesn't look set to shake up the series' tried and true team-based mutliplayer gameplay, but it’s notable due to its setting: World War 1. Historical first person shooters all but died out following the launch of Call of Duty: World at War in 2008. A couple of indie games – such as Verdun – have utilised the setting, but for the most part, the majority of mainstream first person shooters have been set in the near or distant future. Battlefield's jump back in time could certainly inspire other big developers to try their hand at a historical shooter once again.

Vampyr is an action RPG where players take the role of a doctor coming to terms with his new found thirst for blood. What makes the game standout is that every character in the game is a potential target. The choice of who one kills will then affect Vampyr's overarching story. Alternatively, players will be able to finish the game without taking a single life, but this means they won't be able to level up.