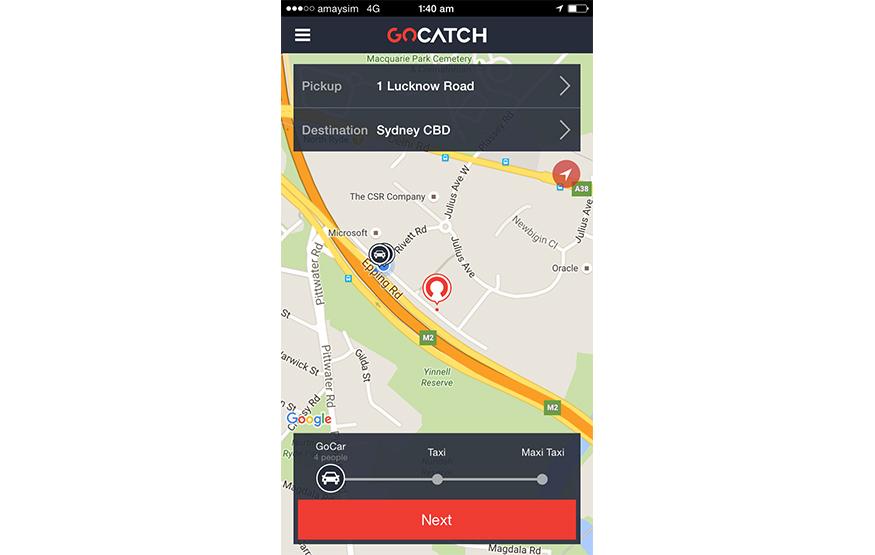 Local taxi booking app GoCatch is going up against Uber with the launch of GoCar, its very own ride-sharing service. Much like UberX, GoCar allows almost anyone with a car to sign up as a driver. Passengers are then able to flag down a GoCar driver in their area through the existing GoCatch app. The app also handles all payment, but unlike UberX, GoCar will not charge surge pricing. While UberX's price fluctuates based on demand, GoCar will only charge either a peak or off-peak rate.

GoCatch CEO Ned Moorfield told CyberShack that off-peak pricing should be similar to an UberX fare, or 20 to 30% cheaper than taxi. Peak pricing is said to be 10 to 15% cheaper. GoCar defines peak times as 6am to 10am on Monday to Friday, 5pm to 10pm on Monday to Thursday, and 6pm to 2am on Friday to Sunday.

"We think having a well defined peak rate is going to get help get more drivers on the road more consistently," said Moorfield.

"Uber has had a grip on the market for long enough. Having a locally-owned Australian-made ride-sharing platform will provide much needed choice and competition."

At launch, GoCar is only available in Sydney, and will operate in the CBD, eastern suburbs, inner west, and lower north shore. Despite the limited pick-up zoning, passengers are still able to travel anywhere. Moorfield quipped that GoCar drivers would more than likely love the opportunity to take a passenger out to Wollongong.

Ultimately, Moorfield hopes to take the service all around Australia, including to regional and rural areas that Uber might not touch.

"I think the next expansion out of Sydney will be will another capital city," he said. "I don't see regional centres happening for some time, but ultimately we hope to expand all around Australia. Of course, we have a lot of work to get to that point."

At present, GoCatch is processing 100,000 bookings a month, and has over 35,000 taxi drivers using the platform. But while the launch of GoCar might ruffle some feathers, Moorfield thinks it will provide taxi drivers with additional opportunities.

"A large proportion of the ride-sharing drivers out there now are current or ex-taxi drivers, and since bookings are made through the same app, overflow will go to taxi drivers," said Moorfield. "There'll definitely be an element that won't respond well, but I think a lot of drivers will be pragmatic about this."

Moorfield says that GoCar will give existing taxi drivers the opportunity to work more flexible hours, and where UberX takes a 20% commission, GoCar only takes 15%.

Moorfield told CyberShack that GoCar already has a good core base of drivers, and that it's seeing a consistent amount of new sign-ups. In order to register, drivers need to have a valid driver authority card. In lieu of this, new drivers are required provide 100 points of ID, and are subject to criminal history and driving history checks. Anyone who's had their license suspended in the last three years or has a criminal history is not allowed on the platform.

But while GoCar may be off to a solid start in terms of drivers, Moorfield asks passengers to be patient as the service grows in its early stages.

GoCar is available as part of the GoCatch app for iOS and Android.