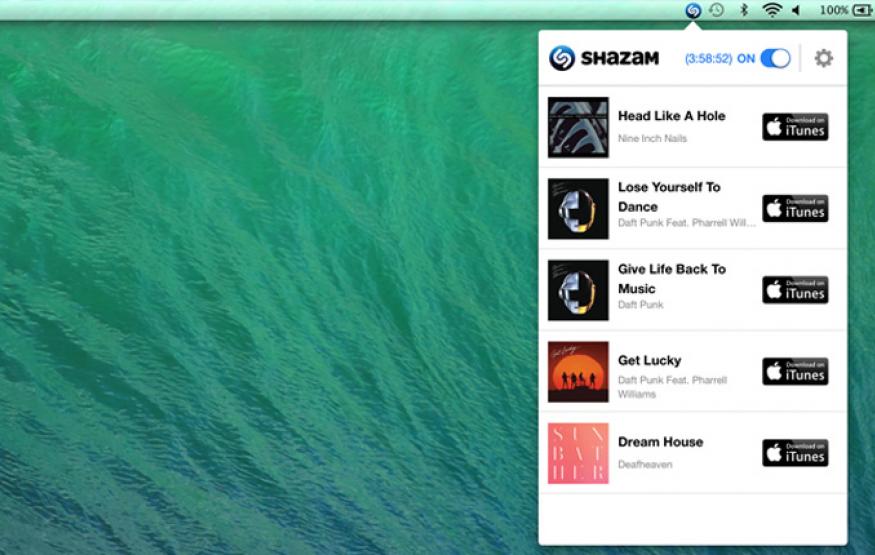 Shazam today announced the launch of a desktop version of their popular music identification app, exclusively for Mac. The Shazam desktop app sits in a user's task bar and provides a notification whenever it recognises a new song.

Shazam today announced the launch of a desktop version of their popular music identification app, exclusively for Mac. The Shazam desktop app sits in a user's task bar and provides a notification whenever it recognises a new song. Clicking on the notification will take users to the Shazam website, where they can view song lyrics, purchase music through iTunes, and browse through the artist's catalogue. Shazam's Chief Product Officer, Daniel Danker said Shazam's desktop version is designed "to give you more with the music you already have".

Following the announcement of Shazam's tight integration in iOS8, the desktop app's Mac exclusivity comes as no surprise. Danker said that the company has a "brilliant partnership with Apple," and as such, Mac "was the right place to test the waters" for a desktop version of the app. "If it's popular, we'll look at expanding beyond Mac," said Danker. Danker noted that with the exception of games, Shazam is one of the first cases of a mobile-only app making the transition to desktop.

While Shazam on the desktop might seem like an odd fit (after all, we often know what song we're playing on our computers), Danker provided a number of usage cases for app other than looking up lyrics. "People Shazam YouTube all of the time," said Danker. He clarified this, explaining that people aren't Shazaming music videos, rather they're trying to find out what song is playing in the background of a "video with dancing babies". In addition, Danker highlighted the two-screen phenomena where users are often on a laptop, tablet or smartphone when watching TV, and may want to know the name of a song in a program or an ad.

In regards to privacy concerns, Danker noted that Shazam does not recor user's audio, and the data transferred to Shazam's servers is merely representational. Users also have the option to stop Shazam for Mac from listening via a toggle switch.

Shazam is available as a free download through the Mac App Store.