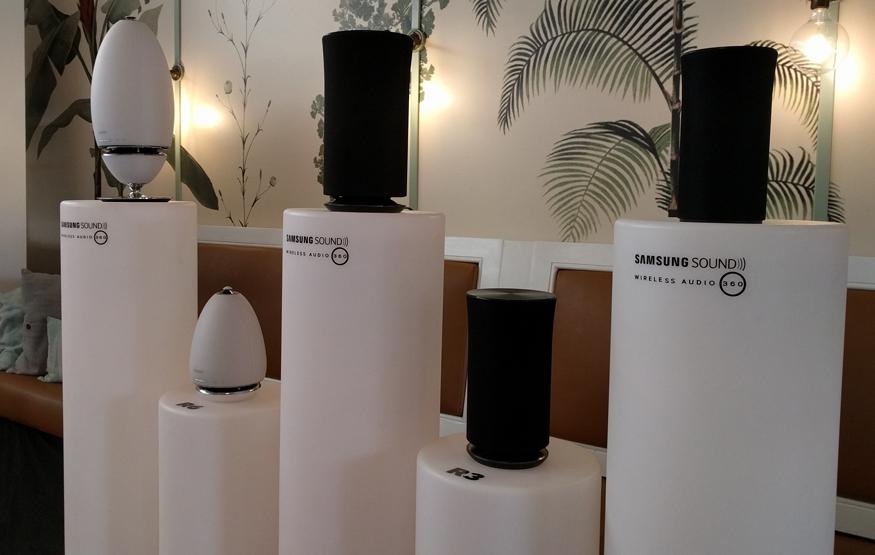 Samsung has refreshed its entire collection of wireless multi-room speakers with a new R-series range available in Australia now. Including five products at launch, Samsung's R-series family of multi-room speakers boast 360-degree sound as their hallmark, and are the first products out of the company's new Los Angeles based audio lab.

Allan Devantier, director of Samsung's new audio lab, described the facility as "on par or better than anyone else's in the industry today" when talking with CyberShack.

"Samsung had made a commitment to be a world leader in audio, like we've done in TV and phones," said Devantier.

Devantier's team includes 16 researchers and engineers, and five active musicians. The lab itself features two anechoic chambers, one for testing speakers, and another for TVs and sound bars.

The R-series' 360-degree sound configuration is said to provide a more consistent audio experience, whether the listener or speaker are positioned. For lack of a better term, the "listening angle" is much wider than a traditional speaker.

Devantier told CyberShack that the speakers' 360 sound also helps their performance when they're placed in a corner. With a typical speaker, corner placement would mean an increase in bass, without only a slightly boost to the mid and high-end. Conversely, Devantier says the R-series' balance stays more natural when put into a corner; all frequencies are boosted equally.

The 360-degree sound also provides an increased sense of stereo-separation when a listener is using just one speaker.

"I'm not saying 360-degrees is going to solve all of the stereo issues, but it makes sound wider, more spacious, more open."

The R-series of multi-room speakers includes five models: the R1, R3, R5, R6, and R7. With the exception of an integrated battery in the R6, Devantier says the key difference between the five models is volume.

"With any good speaker company the difference between the smallest and the largest one is going to be more volume and more bass," said Devantier. "That's what we've done here."

"What Allan Devantier's team is doing is combining high-end fidelity with a mass market model," said Samsung Australia Group Product Manager for Audio Visual Simon Howe.  "[The speakers] are that flexible that they can be used for your TV, they could be in your corner, they could be on your kitchen bench. Where ever they are, you're going to get the same sound quality. That's the unique proposition that R-series provides over a traditional speaker."

Preceding the speaker's local launch, Samsung has rebuilt its multi-room app for Android and iOS, adding compatibility for the Gear S1 and Apple Watch. Gear S2 compatibility will come shortly, and a PC app is scheduled for next year.