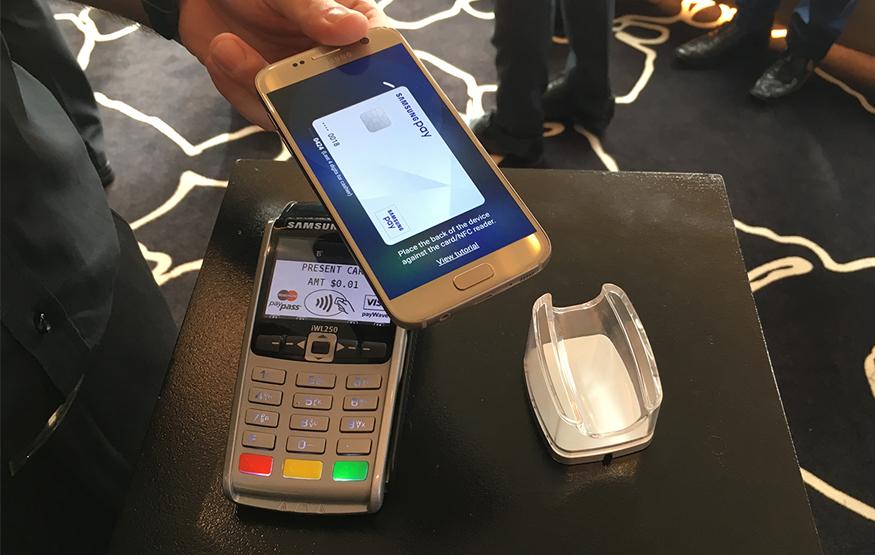 Samsung Pay is compatible with the newly released Galaxy S7 and Galaxy S7 Edge, as well as Samsung's 2015 flagships: the S6, S6 Edge, S6 Edge+, and Note 5. Samsung Pay will eventually work the company's wearables – namely the Gear S2 – but not at launch.

Samsung smartphone owners can add compatible cards to Samsung Pay through the Samsung Pay app. Steps may vary depending on who issued the card. After a card is enrolled, users are able to make contactless payments with it by tapping their phone against a payment terminal. In order to complete a transaction, users swipe up on the phone's screen (even when it's still sleeping), select their card, authenticate through the use of a PIN or their fingerprint, and then tap the phone against the terminal.

As a launch partner, American Express is offering an AUD$15 credit to card holders who spend AUD$5 or more three times via Samsung Pay.

While the majority of contactless payment solutions use payWave-style NFC technology, Samsung Pay also works with Magnetic Strip Transmission. This ensures compatibility with legacy card readers that don't support contactless payments, at least in the modern sense. Samsung says this will also benefit Australians travelling oversea to countries like America, where contactless payments are still very much in their infancy.

Samsung Pay will also be compatible with loyalty cards and gift cards in the near future. Internationally, over 200 merchants offer in-app purchases for gift cards, which one can either buy for oneself, or send to a friend via email. If sent via email, the gift card doesn't require Samsung Pay to use. This has also facilitated promotions such as "make 10 payments with Samsung Pay to receive a $10 gift card". Local merchants have yet to jump on board.

Samsung might be facing off against Apple Pay when it launches in Australia, but Android Pay – Google's contactless solution – will almost certainly pose a much greater threat locally. Slated for launch in the first half of the year, Android Pay will work with any NFC-enabled Android smartphone running KitKat or better.

MasterCard and Visa debit cards issued by ANZ (who now also support Apple Pay), Westpac, the Bank of Melbourne, Bank SA, Bendigo Bank, Cuscal, ING Direct, Macquarie, and St. George will all be supported, leaving Commonwealth Bank and NAB as two major omissions. Commonwealth does however offer its own NFC-enabled tap and pay solution via its Android app.

In addition to Samsung Pay's ability to work with non-contactless terminals, Samsung says hardware and software integration is one the service's key benefits. Samsung Pay is built into a phone's hardware, and makes use of the company's KNOX security platform. KNOX will disable Samsung Pay if detects on the phone. Users are also able to remotely disable Samsung Pay via their web browser if they lose their phone.

As with Apple Pay and Android Pay, Samsung Pay offers tokenised transactions. Rather than sharing card data with a merchant, Samsung Pay creates a one-time account number for each payment a user makes.