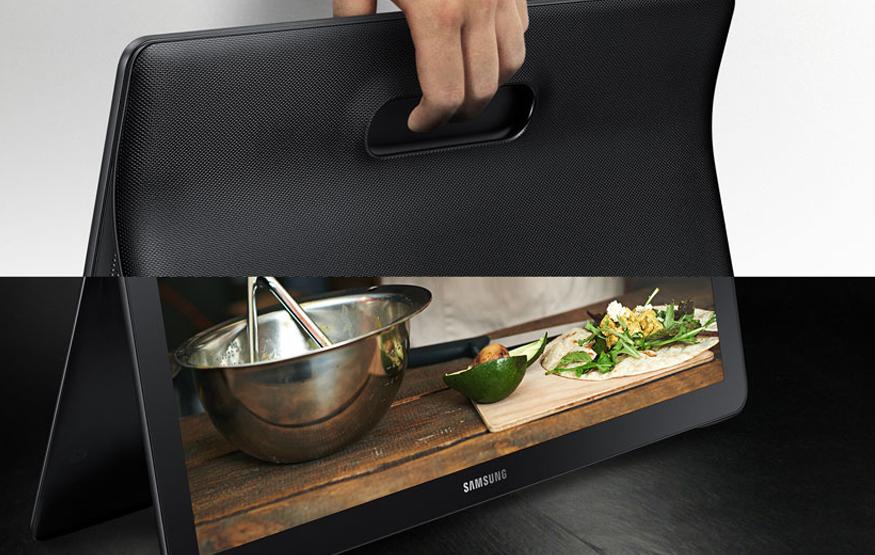 Samsung today unveiled the Galaxy View, a massive 18.4-inch Android-powered tablet that’s pitched as a more of a portable TV than a traditional tablet. This is exemplified by a heavily customised interface that puts video apps such a Netflix, YouTube, Twitch, and Crackle at the forefront of the user experience. Users are able to swap back to a more traditional Android interface if they prefer, and still have access to staples like the Google Play app store.

Weighing in at 2.65kg, the 27.5cm x 45.1cm device certainly isn't portable, but an integrated kickstand removes the need for any additional casing. While the kickstand sits at a fixed angle, it can be used to prop the Galaxy View up like a notebook, or provide slight elevation like more a traditional tablet case.

Under the hood, the Galaxy View boasts a 1080p panel, a 1.6GHz eight-core processor, 2GB of RAM, up to 64GB of expandable storage, and a pair of 4W stereo speakers . The beast is powered a 5,700mAh battery, which is said to provide up to eight hours of video playback.

A 4G enabled Galaxy View will also be available.

Samsung has yet to confirm pricing, availability, and whether the Galaxy View will see an Australia release.