As it turns out, the leaked images of the Galaxy S4 were very accurate. In terms of exterior design, the S4 doesn’t deviate much from the design of the S3 with the exception of the slightly larger screen and the placement of the camera at the back. The screen of the S4 has a resolution of 1080 x 1920 pixels with a pixel density of 441 ppi. The screen is protected by the latest generation of Corning’s Gorilla Glass panels.

The S4 supports 4G LTE Cat 3, Wi-Fi a/b/g/n/ac standards, Bluetooth 4.0 and an IR LED that can convert the phone into a TV remote control. It also has an accelerometer, digital compass, Proximity and Gyro Sensor and a barometer.

It will be powered by a 2600mAH battery and will have Android 4.2.2 Jelly Bean. The S4 runs on an Exynos 5 Octa chipset with two quad-core processors clocked at 1.6GHz and 1.2GHz respectively. It also has a PowerVR SGX 544MP GPU, 2GB of RAM, a 13 MP with autofocus and LED flash at the back and a 2MP front facing camera both of which are capable of capturing 1080p video at 30fps. The S4 will come in 16GB, 32GB or 64GB variants with support for microSD expansion. 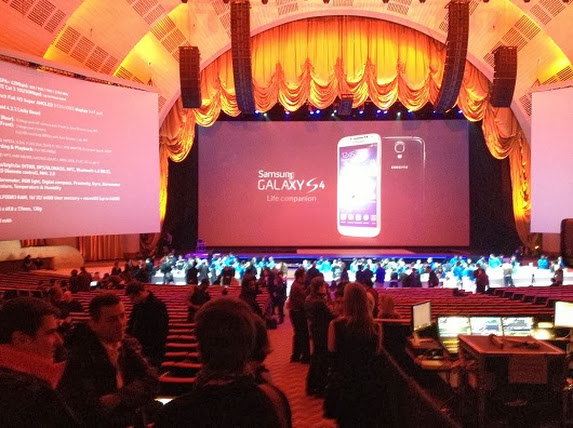 The main improvements on the phone compared to its predecessor are seen on the software of the device. It seems Samsung has worked hard to improve the insides of the S4 by adding a host of new features that are designed to improve user experience and maximise the applications of the phone, which is probably why the company decided to use the tagline “Life Companion” for the marketing of the handset.

Many of the phones new features revolve around the camera. One of which is its dual camera record feature that lets users use both cameras at once either in capturing images or videos as well as in making video calls. There’s also a Sound and Shot feature that lets you record five seconds of audio before you take a shot. 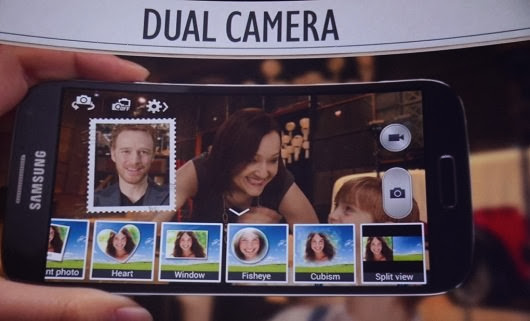 The Drama Shot on the other hand allows the S4 to take more than 100 shots in four seconds so that the user can select some of the captured images to composite in a single frame. A similar Eraser function is also present that takes composite photos of a scene and allows users to remove any unwanted elements in the image (such as photo bombs).

A host of “S” apps are also available on the Galaxy S4. For starters, there’s the S Translator feature that understands 9 languages that can be used even while offline. S Voice Drive on the other hand caters to motorists as it can read text messages and let you act on them through voice commands in a very “Siri-like” fashion.

For health buffs, Samsung has added a S Health feature on the Galaxy S4 that turns the phone into a full-fledged fitness trainer. There are also a number of accessories that users can use with the S Health feature such as the S Band (pedometer bracelet), HRM (Heart rate monitor) and body scale which can later be synced with the device to track your health.

Samsung has also put a lot of effort into improving the S4’s interconnectivity between different devices. First, there is Samsung’s Home Sync which is a personal cloud device with a terabyte of storage which can connect to the S4 using NFC to be used for storing media files which can later be accessed from other devices such as a Smart TV. Samsung Group Play on the other hand allows users to use their phones as stereo speakers in sync.

Two other features worth noting is the S4’s Smart Switch program that lets users transfer data from any phone and the Smart Knox, a new security feature that divides the phone into a personal space and work space.

And lastly, there’s the confirmation of the rumoured Samsung Smart Scroll/Pause which tracks eye movements and adjusts the phone’s behaviour for certain apps.