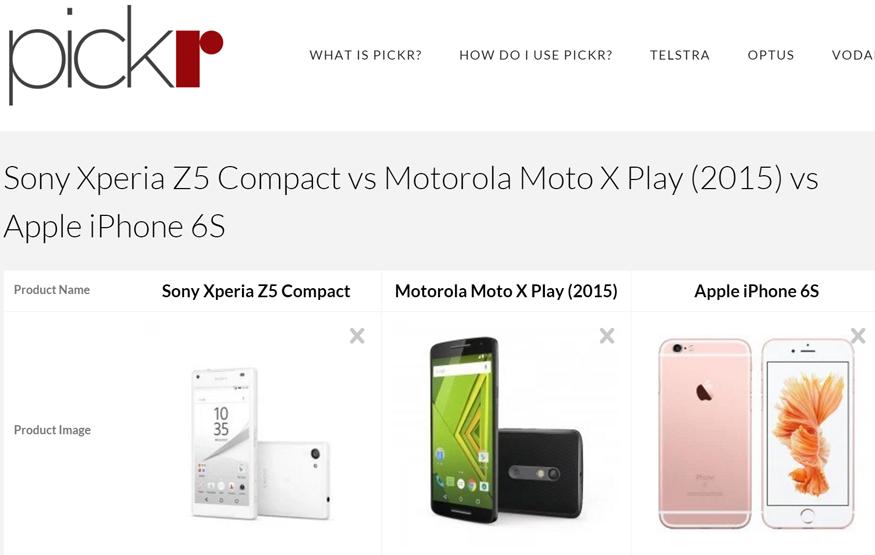 Pickr is a brand new home-grown smartphone comparison tool that places an emphasis on Australian reviews. Built by Gadget Guy (and ex-CyberShack) journalist Leigh Stark as a personal project, the website allows users to compare up to three smartphones at a time, calling out hardware, key features, and the local verdict.

Stark says a local take on devices such as smartphones is important, since Australia can often receive units with different hardware or software.

"Even if the product is the same exact product as released overseas, the experience can differ dramatically due to environmental changes," said Stark. "For a phone, this might be the way the telecommunications network has been setup, while cameras tend to offer different video standards, and sometimes different software to run them. Even flying drones differ around the world due to legal requirements."

While Pickr is able to group phones by the telco that ranges them, it doesn't currently compare the plans on offer. Stark says he plans to keep the website focused on smartphone hardware for the moment, but is considering broadening its focus to encompass categories such as cameras and notebooks.

"[Pickr] is mostly about product comparison and 'is it good'," Stark told CyberShack. "People ask us all the time what's good, what they should buy, and I'd give them a selection of three. This lets them select the three they want when they're in store on a phone or a tablet, or a home. It's about plain English and doing the maths for them. All that research – which is super important when products are made for Australian telcos – isn't always easy to find. Local reviews are often competing with content delivery networks from overseas publications, and that means customers are getting left out. This evens the playing field a little."

Pickr is currently in public beta.