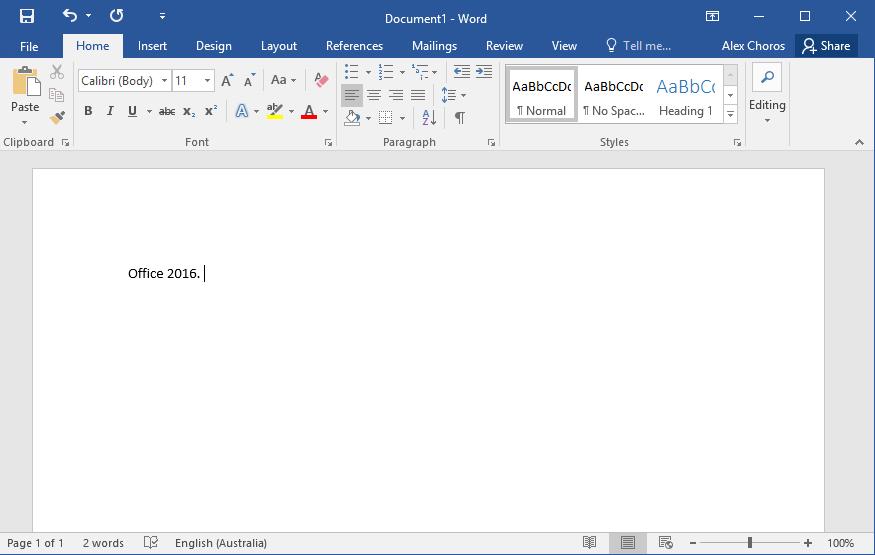 Office 2016 for Windows is now available as a free download to Office 365 subscribers, or as perpetual boxed copy via local retailers including Harvey Norman and JB Hi-Fi.

Office Business Group Director Steven Miller said that features focused on coloration are a major component of the upgraded suite. Many of Office 2016's new inclusions are designed to help users work together, whether that's simultaneously or otherwise.

"Collaboration is at the heart of how we're thinking about reinventing Office 2016," Miller told media at a local briefing for the suite. "Launching Office 2016 is about how we reinvent productivity, how you actually get stuff is with others."

Real-time co-authoring on Word is arguably Office 2016's flagship feature, allowing multiple users to edit one document at the same time. While this has been available in online solutions such as Google Docs and Microsoft's own Office Online for some time, Word 2016 is the first time a desktop client has offered this functionality. This feature is only available in Word at the moment, but PowerPoint and Excel will receive it in a future patch.

Outlook now features a few time-savers, such as an attachment list prepopulated with the user's recently accessed files. Developers are now also able to build apps that work within Outlook. Microsoft showcased three examples: a LinkedIn app for finding information on senders; an Uber app that can sends users a text message with a mobile reminder to request a ride; and a PayPal app for sending money in Outlook.

While many new features across the suite are designed to help teams work together, Office 2016's most useful feature is perhaps a search bar called "Tell Me". Tell Me is a native language search tool for finding the myriad of features across the suite without having to dig through menus. Whether a user wants to add a border to a document or start a mail merge, Tell Me is able to quickly locate the appropriate function.

A single user Office 365 Personal subscription is priced at either AUD$89 per year or AUD$9 per month. This includes three licenses: one for a PC or Mac, one for a tablet, and one for a smartphone.

An Office 365 Home subscription retails for either AUD$119 per year, or AUD$12 per month. This can be installed on five PCs or Macs, five tablets, and five phones.

Outright, Office 2016 starts at AUD$178 for the "Home and Student" edition. Office 2016 for Mac is now also available without an Office 365 subscription, at the same price.