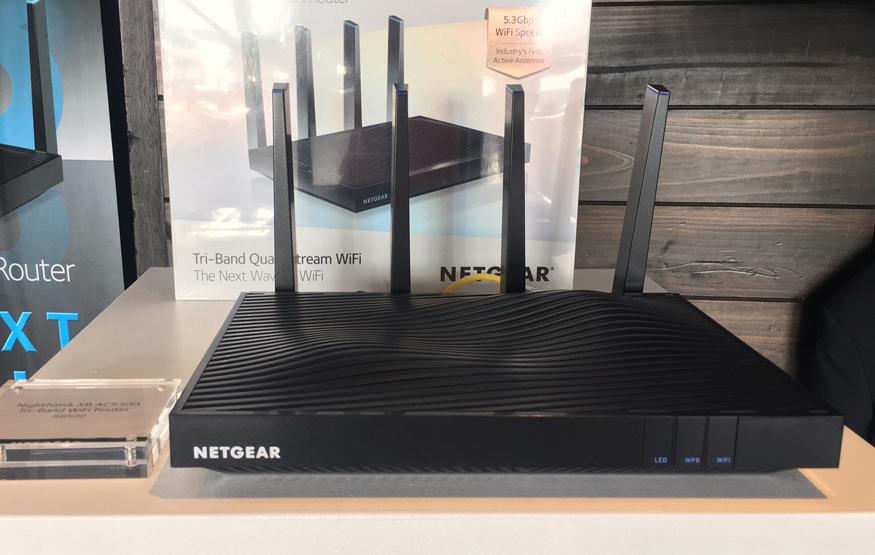 The Netgear Nighthawk X8's list of features almost reads like an EDM festival line-up: AC5300, Wave 2 Wi-Fi, quad-stream, MU-MIMO, tri-band, and active antennas. It all sounds vaguely futuristic, more than a little impressive, and might not necessarily mean much to the average person. And much like a ticket to Stereosonic, it's not cheap either; the Nighthawk X8 will retail for AUD$699 when it launches in Australia at the beginning of April.

Netgear's latest bird, the Nighthawk AC5300 Tri-Band Wi-Fi Router (also known as the R8500), clearly packs a lot of new technology. Theoretically speaking, this allows cumulative speeds of up 5.3Gbps per second across the router's three bands, with up to 1000Mbps on the 2.4GHz network, and up to 2166Mbps on both 5GHz bands.

Netgear Australia and New Zealand Managing Director Brad Little told CyberShack that the Nighthawk X8 is essentially designed to futureproof a house for the foreseeable future.

"There's a real tipping for point to upgrade [their router] right," said Little, "with 4K Netflix, online gaming, content services, there are a lot of people looking at their entertainment options, the connected house, and they're asking 'can my existing router handle this?' Even if the NBN isn't in your house, a device like this can futureproof you."

While this is certainly true, the Nighthawk X8 might be a little too futureproof as it stands. No devices on the market are currently able to make use of the router's top tier speeds. If you're hoping to even get close to 2166Mbps across the Nighthawk X8's Wi-Fi, you're out of luck. This is achieved using the modem's quad-stream technology, but the majority of wireless devices are still only single- or dual-stream, in order to conserve power. Even the high-end wireless devices are typically only tri-stream.

Active antennas, on the other hand, are one of the Nighthawk X8's new features that should come in handy immediately. With active antennas, the antenna amplifier lives in the antenna itself, separate from the router's circuity. This is designed to eliminate interface, and as such provider a higher quality signal. While this won't necessarily increase the Nighthawk X8's range, it should help prevent dropouts.

At AUD$699, the Nighthawk X8 is another step up from the AUD$549 Nighthawk X4S (which itself is a modem router). Little told CyberShack that someone with 15 devices in their household might opt for the X4S, while someone with 20 or more would look at the X8, depending on their usage. Thanks to its tri-band technology, the Nighthawk X8 is said to reduce wireless congestion, by ostensibly giving their network intensive devices their own, separate Wi-Fi.

While the majority of current devices won't be able to get the most out of the Nighthawk X8, Little says the pursuit of better wireless networks isn't going to slow down any time soon.

"[Smart home technology, connected gadgets, and internet of things devices] will continue to drive the need for bigger, better, faster Wi-Fi, and I don't think there's an end in sight."