It’s not about size, it’s how you use it: Parrot’s fun new MiniDrones are coming to Australia in September 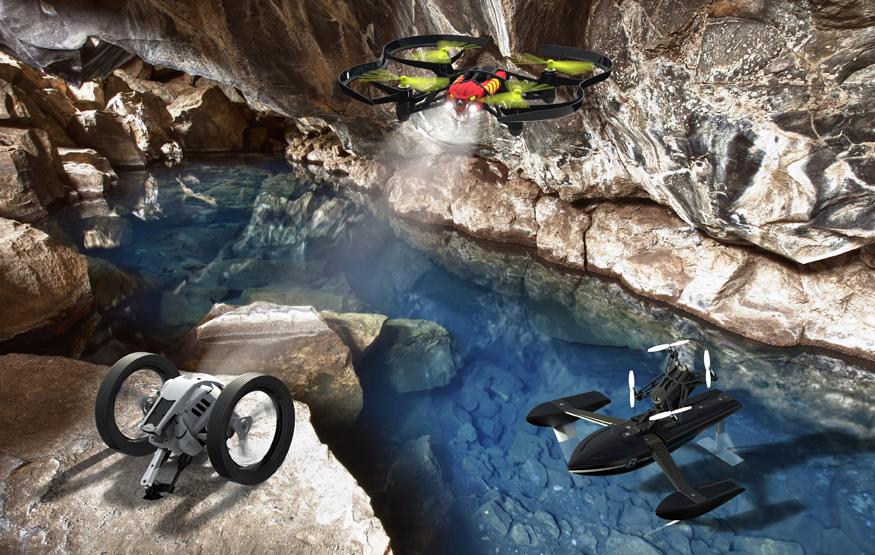 French drone manufacturer Parrot is bringing 13 new MiniDrone models to the Australian market in September this year, following the success of its 2014 range. The 13 drones are spread across three categories encompassing airborne, on land, and water-based devices.

Parrot's MiniDrone series consists of a range of small, smartphone controlled vehicles that are first-and-foremost designed as toys, at least when compared to the company's higher-end hobbyist products.

Company CEO Henri Seydoux says that the success of its initial line of MiniDrones, which sold over 600,000 units worldwide, pushed them to enlarge the family.

Airborne Cargo is Parrot's entry-level drone, retailing for AUD$149.99, and is capable of carrying a small figure or toy brick using a Lego-like connector on its back. It will be available in two different colour schemes.

Airborne Night is almost identical to Airborne Cargo, but features the addition of two "powerful white" LEDs that enable it to fly in darkness. It will retail for AUD$199.99, and be available in three different colour schemes.

It should be noted that Civil Aviation Safety Authority (CASA) regulations state that the usage of flying drones is only permitted in daylight hours. Drone owners who violate these rules can face fines up to AUD$8,500 per offence.

On land, Parrot has replaced last year's Jumping Sumo with the Jumping Race and Jumping Night. Both are available in three different colours, and can jump over 75cm in height and length. The Jumping Race retails for AUD$289 and can drive at up to 13km/h, while the slightly slower Jumping Night trades speed for two adjustable LEDs and a price tag of AUD$279.99.

Parrot also introduced a new drone category, the Hydrofoil, capable of navigating both air and sea. The Hydrofoil can glide across water at up to 5.4 knots, and will retail for AUD$239.99. It will be available in two colours.

Parrot has yet to confirm which retailers will stock its new line of MiniDrones when they become available in September.