Huawei takes on Surface and iPad Pro with the MateBook 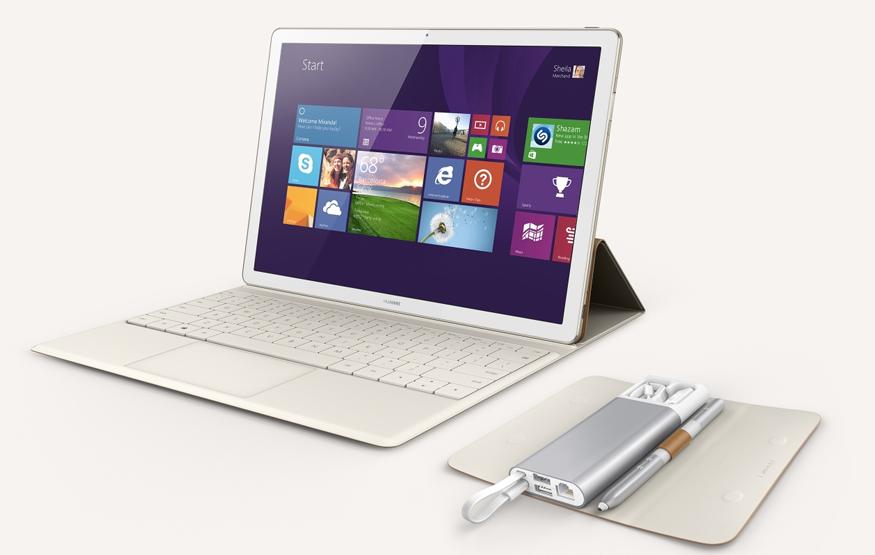 Two-in-one devices are all the rage these days, so much so that Chinese smartphone manufacturer Huawei is taking on the likes of Apple, Microsoft, HP, and Samsung with its own Windows 10-powered convertible.

The MateBook's standout feature is a 12-inch 2,160 x 1,440 display packed into a bezel-light form factor. With a screen-to-body ratio of 84%, it beats out both the iPad Pro and Surface Pro 4. Huawei is also quick to point out that the 640g MateBook is also lighter than its two biggest competitors, and at 6.9mm, the two-in-one is just as thin as an iPad Pro.

The MateBook's keyboard case is used to prop the tablet up when typing, and has a design reminiscent of iPad Pro and Samsung Tab Pro S accessories. In addition, it's backlit and spill resistant.

In terms of hardware, the MateBook is powered by an Intel Core M3, M5, or M7 processor depending on the configuration. RAM sits between 4 and 8GB, and the device can be kitted out with SSD options as big as 512GB. Huawei says MateBook's 4,430mAh battery should provide up to 10 hours of mixed usage. Other notable inclusions include dual speakers, and a fingerprint reader embedded in the tablet's volume rocker.

Of course, no Surface competitor would be complete without a stylus. Huawei's optional MatePen boasts 2,048 levels of pressure sensitivity, and can run for a month on a one-hour charge. While the pointy end is fairly conventional, its rear doubles as a laser point, presumably for giving presentations.

Local pricing and availability has yet to be confirmed.