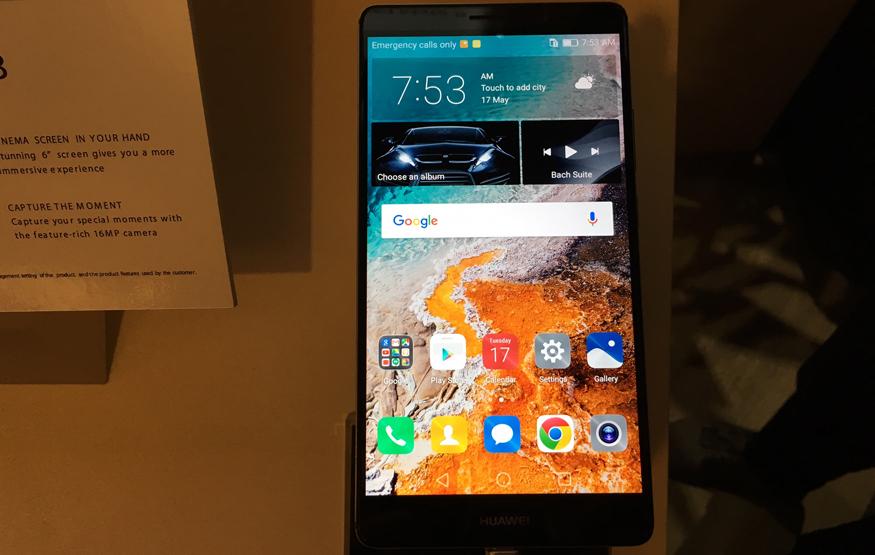 Huawei's 6-inch Mate 8 phablet will be available through Australian retailers from May 24, at an asking price of AUD$899. Customers looking for Huawei's latest on a plan will be able to nab it via Vodafone, with plans starting at AUD$55 per month (including unlimited talk and text, and 500MB of data).

"A lot of people asked us why we’re launching a 6-inch device," said head of consumer marketing Marc Di Giacomo, speaking to media the phone's local launch. "Consumers are really showing an appetite for [large smartphones]."

He pointed to data suggesting that 27% of Australians are now using smartphones with 5.5-inch screens or larger. Despite the comparatively large 6-inch display, the Mate 8 is roughly the same size as the 5.5-inch iPhone 6s Plus.

"Battery life is one of the most common smartphone frustrations in the country at the moment," said head of product Jephix Liu. "Mate 8 comes with a massive 4,000mAh battery inside."

Liu says users should comfortably get two days of usage between charges, and that the Mate 8 is capable of playing 17 continuous hours of high definition video. When recharging, the Mate 8 will go from flat to full in 2.5 hours, and a half an hour top up will take the phone back to around 37%.

Succeeding 2014's Mate 7, Huawei's new phablet is powered by an all new-in house GPU dubbed the Kirin 950. The eight-core Kirin 950 boasts four cores clocked at 1.8GHz, and another four clocked at 2.3GHz. Much like the Mate 7, the handset is able to swap between the sets of four, using the slower processing option for less intensive usage, and ramping up the faster cores for high performance. Huawei says the new processor is twice as fast and 70% more efficient than its predecessor.

Other specifications include a 6-inch display running at 1080p, 3GB of RAM, 32GB of expandable storage, a 4,000mAh battery, a rear-facing fingerprint reader, a 16MP rear-facing camera with optical image stablisation, and an 8MP front-facing camera. The Mate 8 will ship with a modified version of Android Marshmallow, skinned with Huawei's EmotionUI.