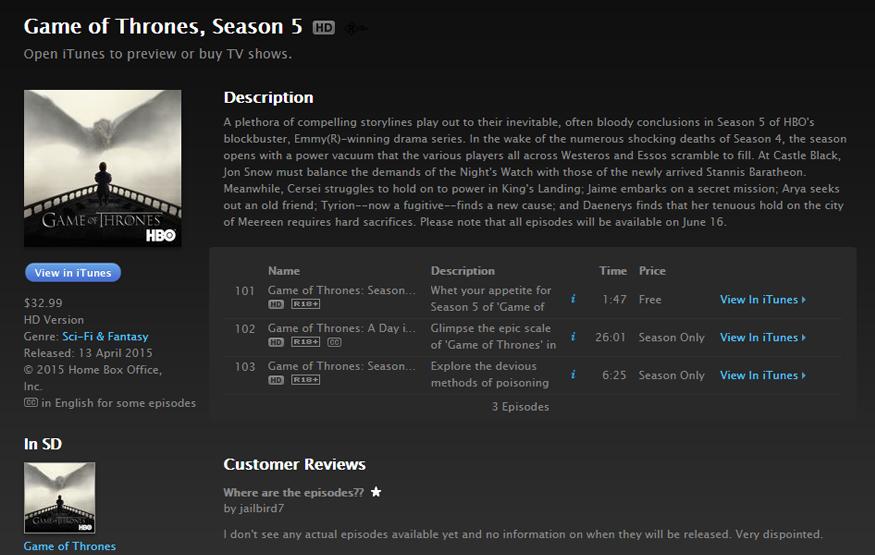 Apple has made Game of Thrones season five available for pre-order via iTunes Australia, scheduling it for release on June 16. Last year, iTunes didn't stock the show's fourth season until almost a month after it finished airing on Foxtel, creating some doubt as to when Apple would sell it this year.

As with past-seasons of the award winning programme, season five can be purchased for AUD$32.99 in high definition or for AUD$27.99 in standard definition. Google Play and Quickflix are expected to also begin selling the new season on the June 16.

The news follows HBO's decision to kick geo-dodging Australians out of its U.S.-only streaming service, HBO Now, which offers access to new episodes ofGame of Thrones for USD$15 per month. Australian subscribers who had jumped on the chance to pay a "fair price" for Game of Thrones were disappointed by the news, with many saying they would simply return to pirating the show.

While buying Game of Thrones through iTunes and pirating it in the meantime is still technically copyright infringement, it may make you feel a bit better about yourself.

CyberShack does not endorse copyright infringement.

Previous Post Australia’s best pre-paid plans for your smartphone
Next Post Vodafone ramps up data inclusions, offers up to 20GB per month