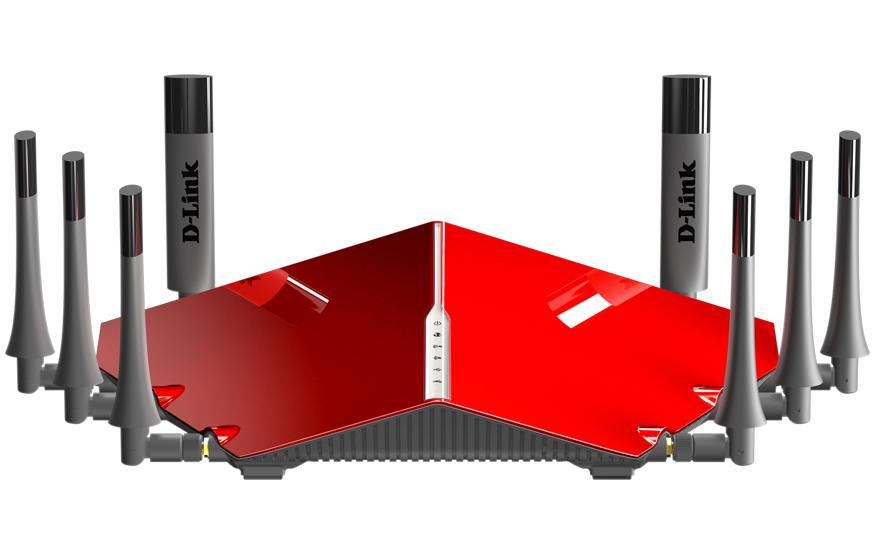 D-Link today took the lid off the DIR-895L AC5300 tri-band wireless router, a refreshed version of last year's bright red, spider-like DIR-890L. While the DIR-895L shares its unique design with the DIR-895L, it has a couple of extra antennas and all new wireless tech under the hood.

MU-MIMO, one of the DIR-895L's callout features, theoretically speaking, allows multiple devices to simultaneously talk to the router, rather than waiting for their "turn". While this can increase network performance, users won't much of a benefit unless they have two or more MU-MIMO compatible devices.

The DIR-895L can facilitate theortical cumulative wireless speeds of up 5.3Gbps per second across the its three bands, with up to 1000Mbps on the 2.4GHz network, and up to 2166Mbps on both 5GHz bands.

While D-Link is positioning the DIR-895L as the ultimate in home network futureproofing, no devices on the market are currently able to make use of the its top tier speeds. The theoretical maximum wireless speed achievable on a single band – 2166Mbps – is made possible through quad-stream technology. However, the majority of wireless devices are still only single- or dual-stream, in order to conserve power. Even current high-end wireless devices are typically only tri-stream.

D-Link says the DIR-895L will hit Australian stores starting from today, at an asking price of AUD$699. It will be available from most Australian tech retailers, and can also be ordered through D-Link's online store.

The DIR-895L will go up against Netgear's Nighthawk X8 (R8500), a similarly pricey wireless router with equally futuristic features. Both utilise tri-band technology, MU-MIMO and quad-stream wireless, and as such, share the problem of being a little too futureproof.

Previous Post Called by the fire: A beginner’s guide to Dark Souls III
Next Post HTC chases perfection with HTC 10