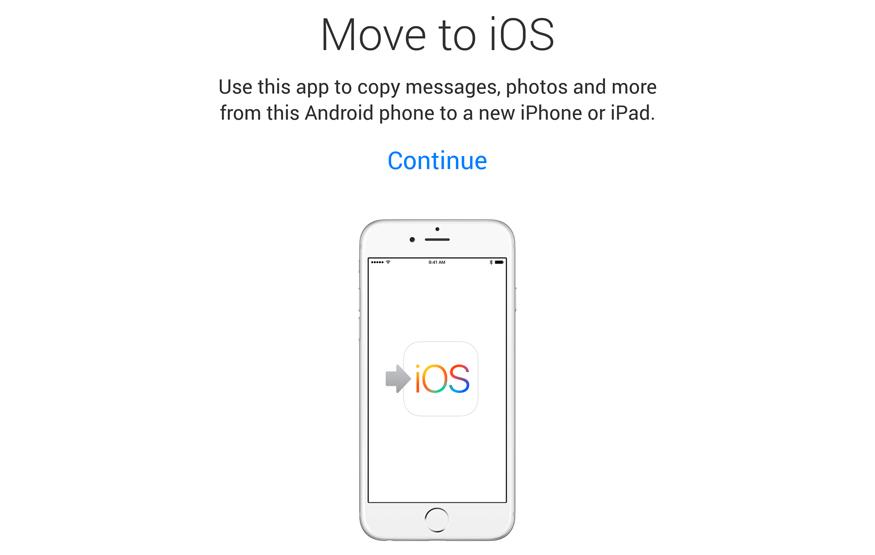 Coinciding with the launch of iOS 9, Apple has launched its very first Android application: an app to help Android users transition to an iPhone or iPad.

Called "Move to iOS", the app says it will transfer information such as contacts, message history, photos, bookmarks, mail accounts, and calendars to a new iPhone over a private wireless network. When setting up a new iPhone, users will now see a new "transfer data from Android" option, allowing them to initiate the process.

Purchased media, apps, and any media stored within apps will not be transferred from Android to iPhone.

Android devices must be running Android 4.0 or higher to run Move to iOS, and iOS devices require iOS 9 to start the transfer.

Apple's first Android app is a landmark event, but reception to its release has been mixed at best. While some Android users provided feedback reporting success with the app, many instead made snarky or sarcastic comments on the Google Play store. Notable reviews complained about 2010's "bumpergate" incident, derided Apple's "walled garden", and made cries of "#TeamAndroid". Others claimed the Move to iOS app blew up their phone and expressed confusion about why it did not support their 1st generation iPhone.

Apple is also planning to bring Apple Music to Android, but has yet to confirm a release date.

Move to iOS can be downloaded via Google Play.