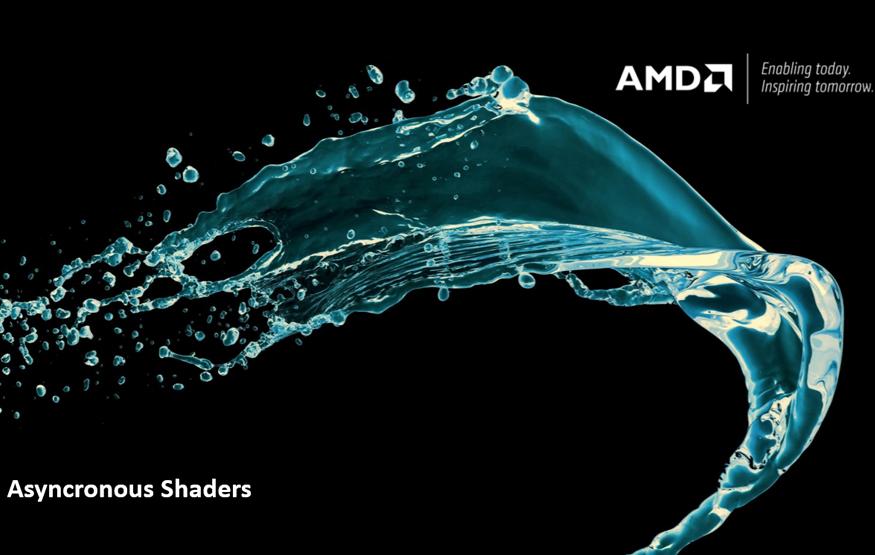 AMD today announced that is has been closely working with Microsoft on a software update that will make its customers' existing graphics processors more efficient: asynchronous shaders. Asynchronous shaders are a core part of DirectX 12, Microsoft's gaming-centric application programming interface, and change the way that developers are able to process tasks.

Essentially, asynchronous shaders allow certain AMD graphics processors (Core Next GPUs) to process multiple command streams in parallel, and each individual queue can submit commands without waiting for other tasks to complete.

In simpler terms, asynchronous shaders enable applications such as videogames to use more of a graphics processor's hardware at once. The two big benefits of this are performance increases – AMD showcased a video showing that asynchronous shaders can almost double a game's frame rate, reduced latency.

AMD suggests that lower latency graphics processing is ideal for virtual reality, and will help reduce the motion sickness some experience when using headsets such as the Oculus Rift. AMD is working on its own virtual reality software development kit, Liquid VR, which is designed to make it easier to for games developers to make virtual reality experiences.

AMD has been working with both Oculus and Valve on Liquid VR, which means gamers playing titles built with its software development kit won't be restricted to which headset they can use. This will also help prevent scenarios such as needing an Oculus headset for one title, but a Valve headset for another.

"Our philosophy is that we innovate and we let everyone get the benefits of it," said Sasa Marinkovic, AMD's Head of Software Marketing, Computing and Graphics. "We're solving problems for the entire ecosystem, not just one manufacturer."

Marinkovic says that AMD sees virtual reality as the "next frontier of digital computing", and wants to be sure that they're the ones who are "powering the pixels" pushed up against player's eyeballs. It's for this reason the graphics processor manufacturer has a vested interest in technologies such as asynchronous shaders that will help making the virtual reality experience more consumer friendly.

DirectX12 is expected to ship alongside Windows 10 when it is launched in winter this year, and will be supported by several AMD graphics processors including Radeon HD7000 series, HD7000M series, HD8000 series, HD8000M series, R9 series and R7 series. These graphics processors will require driver updates to be compatible with DirectX 12 and obtain the performance increase from technologies such as asynchronous shaders.

Consumers likely won't see the benefits of asynchronous shaders until 2016, but greater performance from existing hardware is surely something gamers will welcome with open arms.