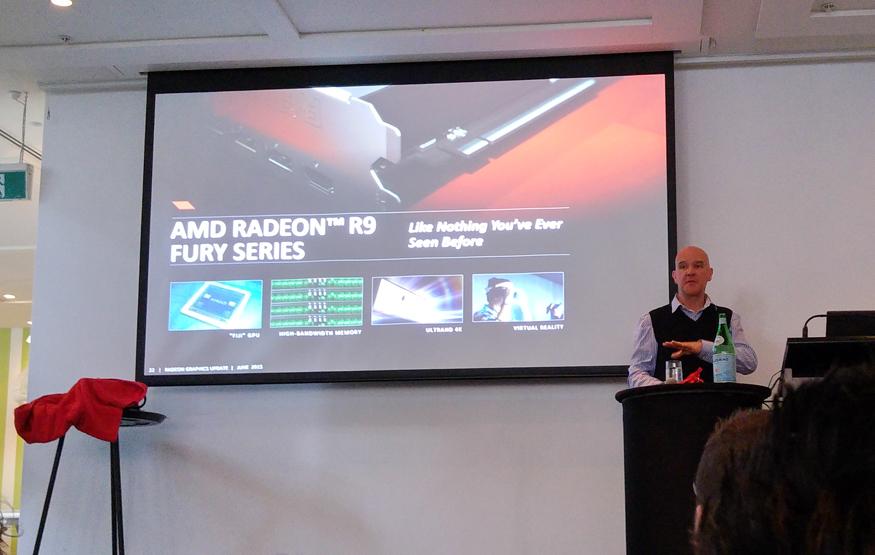 AMD's high-end "Radeon R9 Fury X" graphics processor (GPU) will be available in Australia as of tomorrow, joining other newly announced options that went on sale at the end of last week.

"PC gaming is in a very healthy state – there's something like 700 million people playing PC games around the world," said Huddy.  "That's about one in ten of the world's population – not bad for a gaming platform – but we're most certainly seeing some changes. When we look at the demographics, you see stuff that's radically different from what we were playing a few years ago."

Huddy discussed the growing popularity of MOBA-style (Massive Online Battle Arenas) games such as Dota 2 and League of Legends as a driving factor in the uptake of PC gaming, highlighting the need to make GPUs for users who want to play less intensive titles such as the aforementioned, as well as GPUs for gamers who want to push their systems to the extreme.

"There's a pretty good reason for introducing the new series of graphics cards. It comes down to the games and the ways in which we're playing these games."

At the top-end of AMD's new line-up is the aforementioned Radeon R9 Fury X, a GPU designed to enable 4K-resolution gaming for titles running on ultra-high settings. In AMD's testing, the GPU achieved a 54 frames per second (fps) average while playing with every option setting to "ultra".

AMD says the R9 Fury is designed to be both cool and quiet, running at 50 degrees centigrade while under load, and 13 decibels quieter than competing NVIDIA's GTX Titan X.

"Some people might call that sad, but it's gorgeous," said Huddy. "People who spent a lot of money on a high-end PC want to be proud of the stuff inside that PC."

The R9 Fury X will be available from tomorrow, and will retail for AUD$979.

One step down from the R9 Fury X are the Radeon R9 390X and the Radeon R9 390. These cards will have 8GB of GDDR5 VRAM, and are designed for "excellent" virtual reality experiences and 4K gaming at more moderate quality levels.

On the low are the Radeon R7 370 and Radeon R7 360, GPUs designed for less intensive titles such as Dota 2. Both are available now, and will retail for AUD$229 and AUD$169 respectively.

All of AMD's new GPUs are optimised for Windows 10 and support DirectX 12.