10 reasons to be excited about iOS 10 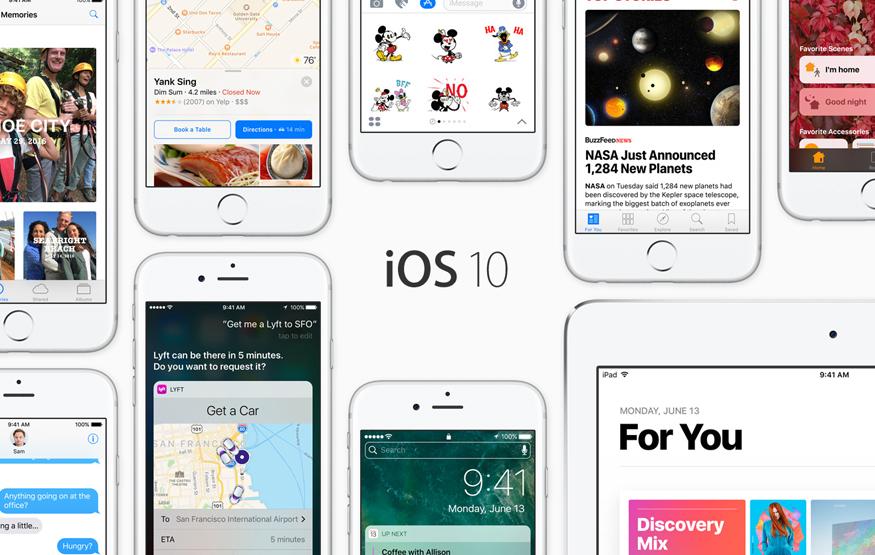 Apple's newly announced iOS 10 will be making its way to iPhones and iPads this spring (presumably in September). While that's still a couple of months away, the update promises to make iOS more open to developers (among other things), which in turn, could make your iPhone or iPad a much more interesting device. Here's a couple of reasons iOS 10 is worth getting excited about.

Open Siri
iOS 10 is going to make Siri a hell of a lot more useful. Apple's finally opened up Siri to developers, which means she'll be able to understand instructions that relate to third party apps. Apple provided a few examples, such as being able to use Siri to send a message via Slack, book an Uber, or make a call via Skype. At launch, Siri will be a little limited (interactions will be restricted to messaging, calls, booking a ride, fitness, sending money to friends, and photo search), you won't quite be able to make a lazy pizza order yet, but depending on how open Apple is willing to get, Siri could very well become a full-fledged competitor to the likes of Amazon Echo and Google Home.

You can finally delete Apple's apps
iPhones and iPads come with a couple too many apps out of the box these days. Some are useful, some go unused (I'm looking at you, Stocks) and end up in a folder named "apps I don't want but can't delete". Thankfully, with iOS 10, Apple will finally let you delete the vast majority of the apps that ship with iPhone and iPad. Some aren't removable – Phone, Messages, Safari, Wallet, Clock, Camera, Settings, Photos, and the App Store, to name a few – but almost everything else can go. If you decide you want them back, it's simply a case of redownloading them via the App Store.

VoIP will no longer play second fiddle to phone calls
When you receive a call through an app like Viber, Skype, Facebook Messenger, or WhatsApp on iPhone, you're notified in the same way as if you're just getting a text message; a small standard notification. It's not exactly an ideal experience. With iOS 10, all of these apps will be able to work exactly the same way the Phone app does; you'll see a full screen alert with a "slide to answer" prompt at the bottom of the screen. Recent call activity will be viewable with your "normal" phone calls.

Not only will this be a much cleaner way to make a receive calls through VoIP services like Facebook Messenger and Skype, it means we could start seeing people moving to data-only plans and eschewing mobile numbers. While you still need a phone number for this and that, iOS 10 is going to make data-driven calling services much more appealing.

Universal clipboard
If you've got multiple iOS devices, or an iOS device and a Mac running macOS Sierra, iOS 10 will allow you to copy text or an image on one device, and then paste it on another. There's been plenty of times where I've copied text on my phone then emailed it to myself in order to have access on other devices, so this seems like a nice way to streamline the process.

The only catch is both devices have to be signed into the same Apple ID.

Messages gets an overhaul
The Messages app is getting a whole lot of love in iOS 10, and while there are a few practical features, most of the new functionality is playful in nature. Emojis are three times bigger, and will be included in predictive text. When inserting an emoji, words that can be swapped for an emoji will automatically be highlighted.

You'll also be able to bring their messages to life with "bubble effects" and "full screen effects". Bubble effects are short animations that play when a message is being delivered, such as appearing larger or smaller than normal. One of the more interesting options is invisible ink, which makes the recipient "scratch" a message or photo to reveal it. Full screen effects are animations that take over the entire screen, and include options such as balloons and fireworks.

Developers will also be able to build their own apps for Messages. These will include sticker packs, ordering services, and peer to peer payment services.

Storage optimisation
Running out of space on your iPhone or iPad can always be frustrating, especially when you find yourself asking what to delete. With iOS 10, Apple is hoping to make that process a little easier. If you're running low on space, iOS 10 will be able to automatically delete music you haven't listened to in a while. You can set a minimum amount of space you want to allocate to music (as in, the phone will always keep at least 4GB of songs, for example) or turn the feature off entirely.

Per conversation read receipts
Read receipts are a mixed blessing; they can be incredibly useful in professional situations, but they can also make it look like you're avoiding someone if you haven't had time to write back. iOS 10 will let you turn on read receipts on a per conversation basis, so you can switch them on for when messaging colleagues, but keep them off for personal conversations. Or you know, the other way around. Whatever you prefer.

Apple Music redesign
Apple Music isn't the iPhone's finest app; it's a little cluttered and a little confusing. Fortunately, it's getting an overhaul in iOS 10. While I'm really not a fan of the "big text" reliant design (it looks like something built for Windows Mobile, rather than for iPhone), Apple's new Music app makes a few meaningful changes right off the bat. Your music library is now the first thing you'll see when you open the app, and there's a new section that shows you the music that's actually on your iPhone and or iPad's internal storage (as opposed to "in the cloud"). Let's just hope Apple cleans up the design before iOS 10's spring launch.

Better Photos app
Smartphones have become primary cameras for many of us, but what's the point of taking photos if you can't find them? Apple is improving its Photos app with a bit of smarts (seemingly inspired by Google Photos), and come iOS 10, the app will be able to sort photos by where they were taken, who's in them, and more.

Revamped lock screen
The lock screen is the first thing many of us see when we pick up an iPhone, depending on how fast your fingerprint reader is. In iOS 10, the lock screen becomes more like a hub for quickly interacting with your phone. Picking up your iPhone will automatically bring it to life, and reveal the lock screen without the need to press a button. Notifications will appear in clean white bubbles that can be interacted with in-line through the use of 3D Touch. For example, you'll be able to accept a calendar invite, or view and participate in an SMS conversation right from the lock screen. Swiping left will reveal your widgets, swiping right will open the camera.