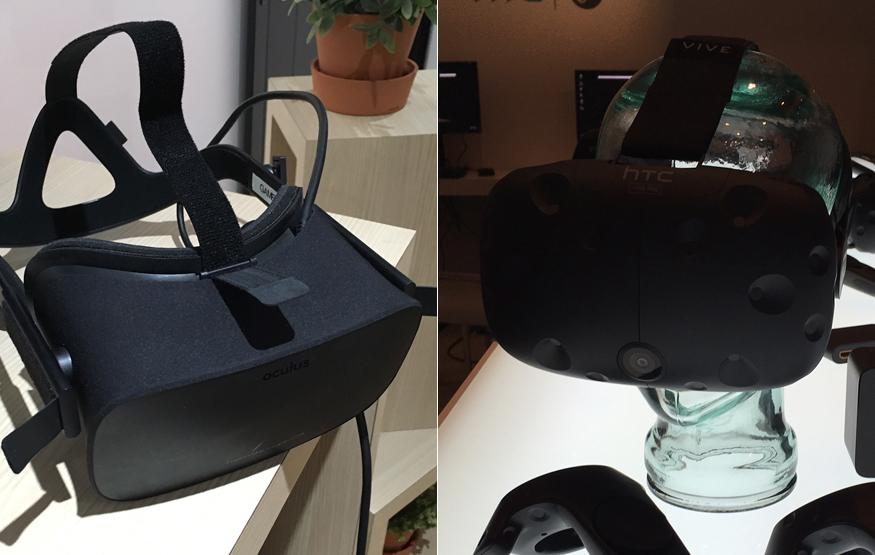 The Showdown
As it stands, it's hard to pick a clear winner; Oculus and Vive both have their merits.

From a technical level, both headsets provided a silky smooth virtual reality experience. Vive's display seemed slightly clearer than Oculus', but otherwise, I couldn't perceive much of a difference.

HTC and Valve are certainly aiming higher when it comes to Vive's motion tracking capabilities. The one-to-one relationship between your real world and virtual reality movements is incredible, and really helps in creating engaging, immersive experiences. At the same time, I certainly don't have the space for a Vive setup in my apartment. The ability to just use a traditional controller with Oculus is great for people like me who simply don't have the room for an sprawling virtual reality rig.

While neither headset has been released yet, there was a lot more variety in the demos Oculus had on display at CES. With the Rift, I tried a space shooter, a third person platformer, a first person shooter, and a real time strategy game. With Vive, almost every demo could be classified a point-and-click adventure.

Of course, two of the Oculus demos I tried were full-fledged games almost ready to be released, but as it stands, the Rift could have the more compelling launch line-up. This gets a little more complicated due to the fact it won't necessarily be easy for developers to build games that work on both platforms. While some games – such as Office Worker – will be available for both Oculus and Vive, there's a good chance their game libraries will be very different.

This early on, the risk of backing the wrong horse is very real, and unless you want to purchase two pricey bits of kit, there is a certain degree of uncertainty as to how the platforms will grow.

That being said, both Oculus and Vive are oozing with potential, which makes picking one over the other incredibly difficult. It's very possible we'll see an Xbox versus PlayStation type scenario where there's two or more coexisting virtual reality platforms.

For now, I'll end with this: my experiences with the Oculus Rift and the HTC Vive both left me smiling uncontrollably. It's the kind of euphoria that brought to mind my first GameBoy, my first PC, my first Nintendo 64; an all new world, brimming with possibilities. As someone who sees “new” gadgets every single day, virtual reality is a technology that actually feels new, and it's hard to express how excited I am.

I can't think of a higher endorsement.