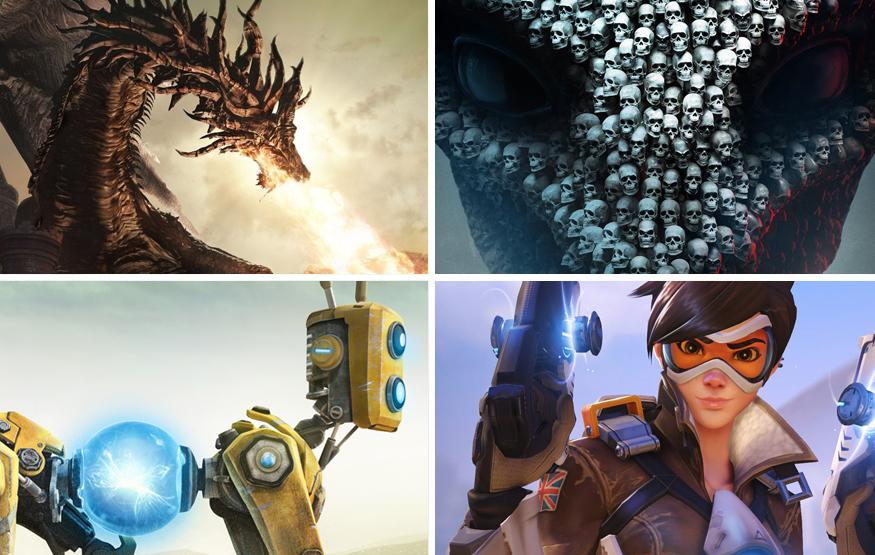 2015 was a pretty fantastic year when it came to video games. We were graced by Bloodborne, The Witcher III, Splatoon, Super Mario Maker, Metal Gear Solid V: The Phantom Pain, and Until Dawn, just to name a few favourites. 2016 is going to have a hard time living up to these juggernauts, but that doesn’t mean we aren't going to get some great games this year. Here are a few of the titles I can't wait to get my hands on.

The Souls series (and Bloodborne) are games in a class of their own. The combination of meticulous world building, tight gameplay, and an old school approach to difficulty has not only resulted in some this generation's most rewarding titles, but spawned an entire genre of imitators.

Bloodborne was easily my favourite title of 2015 (I'm actually halfway through replaying it now), so it should come as no surprise that I'm looking to Dark Souls III.

Provided it manages to keep its tough-but-fair approach difficulty balance, Dark Souls III could easily be game of the year material.

After 10 long years of development, Final Fantasy XV is finally set for release this year. While Final Fantasy XIII had a decidedly lukewarm reception, the upcoming instalment hopes to reinvigorate the series with a true open-world and a more action-orientated approach to combat. This might sound like blasphemy to J-RPG diehards, but I for one think the long-running series is in needs of a reinvention. Hopefully Final Fantasy XV can deliver.

The Last Guardian is another one game that's been in development for what feels like forever. After being unveiled in 2007, The Last Guardian soon fell of the map, causing many to assume it had been cancelled.

Thankfully, the game made a reappearance last year, and is now slated for a 2016 launch on PlayStation 4.

While it's easy to lose excitement about a game that's been in the works for almost ten years, The Last Guardian is headed up by the creator of the critically-acclaimed Shadow of the Colossus and Ico. In addition to receiving praise for innovative gameplay, both titles are considered poster children for the "games as art" movement. Here's hoping The Last Guardian can live up to the hype (and actually make it out before the end of the year).

The Legend of Zelda Wii U
Wii U
TBC

The yet-to-be-named Wii U instalment of The Legend of Zelda made this list last year, but was unfortunately pushed back to 2016. Nintendo has promised to shake-up the long-running franchise with an open-world approach to gameplay, but we don't really know too much else yet.

While I'm sure some fans are dubious, twisting Zelda's conventions worked very well for A Link Between Worlds. I've got my fingers crossed.

Lucky's Taleis one of the launch titles for the Oculus Rift virtual reality headset, and will be bundled with every unit. Out of all of the virtual reality demos I've tried, third person platformer Lucky's Tale is among my favourites.

While I wasn't able to spend much time with Lucky's Tale, it oozes with charm, and has a solid mechanical underpinning. Hopefully this means we'll get hours of satisfying, virtual reality platforming.

Overwatchis a class-based multiplayer first person shooter that could very well be Blizzard's answer to Team Fortress. While Blizzard isn't exactly known for FPS-style titles, the company has hit the ball out of the park multiple times when it comes to experimenting with new genres, offering fresh takes on MMORPGs and card games in recent years.

At the very least, Blizzard knows multiplayer. Hearthstone has given me hundreds of hours of fun in the form of a free app, so I'm keen to see what the company can do with a full-priced multiplayer shooter.

ReCore is an all new game from the creator of Mega Man dealing with notions of humans versus robots. We don't actually know much else about the game yet, but it will be action based, and Metroid Prime veterans are also involved with the project.

While it's not much to go on, the combination of a slick trailer and the team's pedigree makes me think ReCore is worth keeping an eye out for.

Quantum Break is Remedy Entertainment's first game since Alan Wake, which itself is the main reason Quantum Break is on this list. Alan Wake did an excellent job of subverting video game story-telling conventions through collectible premonitions found in the form of manuscripts. Not only did this allow the game to toy with ideas like predestination, it helped build suspense in an unusual and effective manner.

It looks like Remedy is hoping to expand on this with Quantum Break, a story about two time-manipulating characters that's half game, half TV show. After completing a segment gameplay, you'll be treated to an episode of the in-game TV show that expands on the story (apparently as long as 20 minutes each).

Interestingly, the actual gameplay takes place from the protagonist's perspective, while the TV show is set from the antagonist's. While you'll be putting the controller down while watching the "show", you'll still be able to make choices within it that affect the overarching game world.

Quantum Break sounds like the kind of game that could go horribly wrong if the story isn't strong enough, but at the same time, it's certainly one of 2016's most ambitious titles.

As the name suggests, XCOM 2 is the sequel to the recently rebooted alien-swatting XCOM: Enemy Unknown. Set 20 years after the reboot (taking the bad ending where you fail to stop the alien threat as canon), you step in to the shoes of the commander of a guerrilla resistance force trying to reclaim Earth.

I'm a sucker for a good turn based strategy, so I'm very keen to see what XCOM 2 brings to the table.