The fleeting cloud: Rdio’s impending shutdown and the future of music streaming 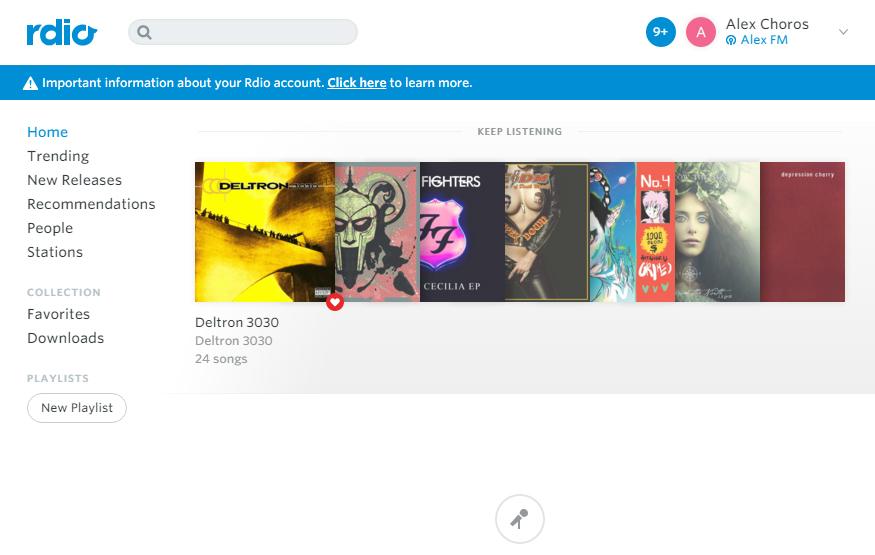 As of this week, ill-fated music streaming service Rdio is no longer taking new subscriptions. Existing users will have their subscription cancelled when their next billing date rolls around. They'll still have access to the site's free tier, and new music is still being added to the service, but the writing is on the wall: Rdio is shutting down.

For those that missed the news, online radio stalwart Pandora is buying Rdio – well, Rdio's assets – for a cool USD$75 million. As part of the acquisition, Rdio is filling for bankruptcy and winding down the service in all markets it currently operates in. We don't know when the "off" switch will be flicked, but it's happening in the next few weeks.

Under an incredibly polished suite of apps and slick user interface lay a troubled company. In addition to losing over USD$2 million per month, Rdio reportedly racked up over USD$220 million in debt. It's not surprising that Pandora opted to buy Rdio's assets, rather than the business itself. But unless you actively seek out news on music streaming services, you'd be none the wiser. Until yesterday, you could still subscribe to Rdio.

Rdio's impending shut down is a timely reminder that the cloud isn't forever. You're paying for a service, rather than tangible products, and there's always a chance the service can go away. I joined Rdio in May 2012. That's 42 months of music streaming, or AUD$504 in subscription fees. I'll presumably be able to export a copy of my music library into another streaming service, but I'll still be losing the three and a half years of insight Rdio has garnered about my taste in music, and henceforth the curation it could provide.

It's not the end of the world, but it's sad nonetheless. As a music lover, I've invested time, effort, and emotion into the service, and now it's all but gone.

Of course, Rdio isn't the first online music service to shut its doors in recent times. Apple acquired Beats Music to build its streaming service, while Beats previously bought MOG as the basis for its on-demand offering. Locally, Telstra shuttered BigPond Music at the end of last year, giving users just a month to download local copies of any of their past purchases.

But at the very least, BigPond Music customers still had access to their music. Australian video-on-demand service EzyFlix suddenly closed up shop earlier this year, leaving customers without access to movies and TV shows they thought they had bought to own.  While EzyFlix users could buy "perpetual" access to video content, it had to be viewed through the company's website or app, both of which are now gone.

Looking a bit wider, paying OneDrive subscribers recently found that their "unlimited" cloud storage will shrink back down to 1TB. Free subscribers will have their allowances cut from 15GB down to 5GB.

If you don't actually own the product, it’s subject to change.

While Rdio is the easily the biggest music streaming to fold, it may not be the last. Spotify is the clear winner when it comes to brand recognition, but it's not making a profit either. The service's 2014 financial results revealed an operating loss of €165.1 million on €746.9 in revenue, almost double its 2013 loss of €91.2 million. Spotify has however had much better fortunes when it comes to raising capital, closing a USD$526 million round of funding in June. As a result, the company is currently valued at USD$8.4 billion.

French music streaming service Deezer is also running at a loss. Financial information revealed in the company's filing for an initial public offering showed an operating loss of €27 million in 2014 on €140 million in revenue.

Of course, losses are to be expected when a company is still in its infancy, and as a whole, music streaming isn't even ten years old. It's commonly accepted that music streaming services need to operate at scale to actually make a profit, but it's concerning that Spotify – boasting over 75 million subscribers – isn't in the green. New competitors such as Apple Music and Tidal means the streaming marketing isn’t going to get less fragmented any time soon, which could make scaling harder.

In the worst case scenario, I see Apple, Google and Microsoft as the three players who could continue to compete in the streaming market space; it's a value add, rather than a core business.

Even in the best case scenario, I think we'll be seeing more services close their doors. In its current form, music streaming clearly isn't sustainable unless you're running at scale, and it's very hard to run at scale when you've got more competitors than fingers. Unless we see a radical change in the streaming business model, Spotify, Deezer, Tidal, Guvera, and iHeartRadio could all potentially be joining Rdio.

Streaming music isn't going away, but some of the companies offering it almost certainly will, and they might take your music library with them. Sure, you technically never owned it in the first place, but that doesn't make losing your collection any easier.

In a world where we're increasingly being sold intangible solutions on a monthly basis, I think there's something to be said for visiting a brick-and-mortar record store and just buying the damn CD.