Stan making Australian shows to take to the world, “No Activity” is just the first 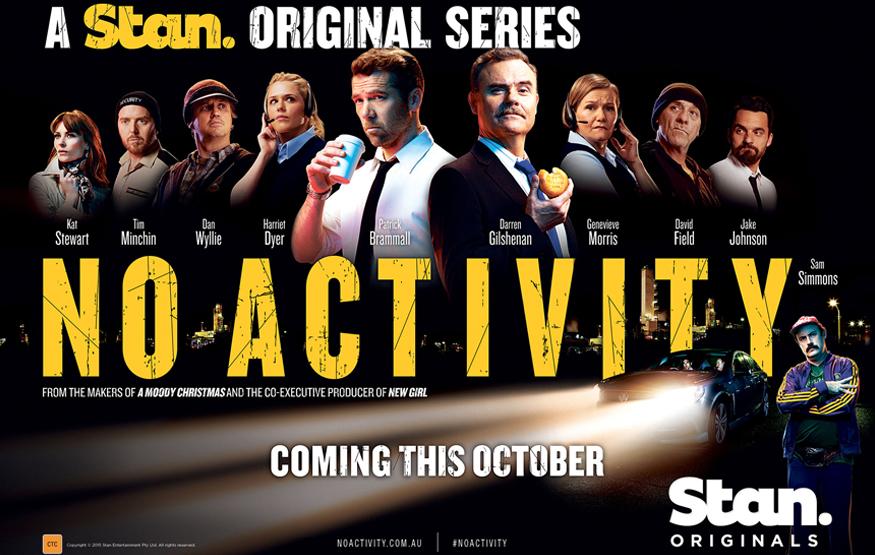 Stan's first original series, No Activity, is hitting the service toward the end of October. No Activity is a quintessentially Australian comedy from the makers of A Very Moody Christmas that follows a pair of cops on a stakeout where nothing happens. It's been described as a police show without the action.

CyberShack was treated to an advanced screening of the first two episodes, and it certainly delivers on laughs, provided you enjoy dark comedies. No Activity feels Australian without feeling too Australian, it features great acting, and it's a little crasser than the typical show you'd see on free-to-air TV.

To make the wait for No Activity's release a little easier, we had a chat to Stan Content Director Nick Forward about the show, taking local programming overseas, and the service's future plans for original content.

CyberShack: How did No Activity come about?

Nick: Jason Burrows from Jungleboys, who's one of the executive producers of No Activity, showed us some clips they'd done between Patrick Brammall and Darren Gilshenan, and between Genevieve Morris and Harriet Dyer, which they filmed last year.

They were really funny clips with a lot of potential in them, but they were still working out how to put them into something that felt like a more overarching narrative, and we asked them to come back with a fuller pitch of what it would look like as a six-part comedy.

When they did, it was such a good pitch, and such a funny group of talented actors that we decided to go ahead.

Nick: I think [being on Stan] affords certain freedoms, narratively, in terms of the content you can show. I think you can get probably get away with a more loosely structured narrative in a subscription world, because chances are people who've committed to watching one episode are probably going to hang around for the rest.

You don't need to hit quite the same beats you do with a free-to-air comedy. No Activity feels very different to anything else, I can't imagine it finding a home on any current Australian channel.

CyberShack: Will you be sticking to a traditional TV structure, where every episode is a set length, or will there be flexibility for some to shorter, and some longer, thanks to the nature of streaming?

There's also a commercial imperative to create shows that are designed to be sold to our overseas partners as well. Making a show at 23 minutes is something I can take to overseas TV channels who could run it in a half an hour slot. There's both a commercial and an artistic driver to get to those durations.

CyberShack: So you're looking to take No Activity overseas?

Nick: Yeah, absolutely. Between us and the Jungleboys we're certainly talking to partners overseas about No Activity, that would like to run it after we premiere it this year.

CyberShack: Are you looking at creating more original content for Stan, or are you waiting to see how No Activity does first?

Nick: We're already well into the development of our second original series, Wolf Creek (a spin-off based on the popular slasher film with John Jarratt reprising his role), which we'll have some announcements about in the coming weeks. We've already talked to a number of producers, writers, and directors about projects they've got in the works, and we'll look to very regularly have original content coming through Stan.

Are you able to tell us how many originals you have lined up?

Nick: No Activity is the only show we have made at the moment. We've got development deals, we're funding the development of Wolf Creek and Enemies of the State (a political thriller by the writer and producer behind Rake), and we will fund development on more shows as we see the right kind of projects come through.

CyberShack: How important will original content be for Stan in the long run?

Nick: Original content is very important. It helps define the tone of the service, it gives us a real local identity that helps differentiate from the other platforms on the market, but also helps put us in a bit more control of our own destiny, so we're not at the whim of what else is available. If you're making great content, you can always rely on your great content to drive the service.

CyberShack: Is this inspired by the Netflix model, or is a natural step for a service owned by a TV network and a media company?

Nick: I don't know how much our original programming has to do with our parent companies. It's a natural step for a content aggregator who's in the market to buy new content, it comes down to that sense of controlling your own destiny. It's great that I can go and buy fantastic content from Sony, the BBC and Stars, and it's fantastic to have these premiers in Australia, which do a great job of driving awareness of our brand.

The content we make is a whole level deeper again. It's a very natural path for a streaming video on demand (SVOD) service to go down, in the same way platforms overseas have done the same thing. It's what you need to do to build a service that caters to a wide range of people, and certainly for Australians, having Australian original productions is very important.

CyberShack: What are the defining traits of an original show that Stan commissions?

Nick: The defining point of productions we will continue to make is that they need to designed to be consumed in an SVOD environment. They need to have a strong and linked narrative – absolutely not episodic TV. It's serialised television, it's more a model where it feels like an eight-part film rather than an eight-part series. It's a single narrative that drives continued viewing, so if someone watches the first episode, they watch the second as well. And it needs to feel premium and strong.

CyberShack: Is premium going to be a challenge considering Stan's local nature? When Netflix makes an original, it can afford to splash out USD$90 million on a single season thanks to a worldwide subscriber base. With Stan, you're currently an Australia-only offering, and as such, have a smaller amount of potential subscribers.

Nick: As we continue to evolve, and as we continue to grow as a service, we'll look for partners overseas to make our content with. The model for us is almost the opposite of Netflix. Where Netflix makes a show that’s simulatenously for the whole world, Stan will make shows in Australia that are designed to taken out to the world. There’s likely to be a little less parochial than traditional Australian productions and probably a little more accessible for a worldwide audience.

Previous Post A robot is queuing for the iPhone 6s in Sydney
Next Post iPhone 6s now on sale in Australia, telcos say stock should last the weekend