Netflix Originals: What should you watch? 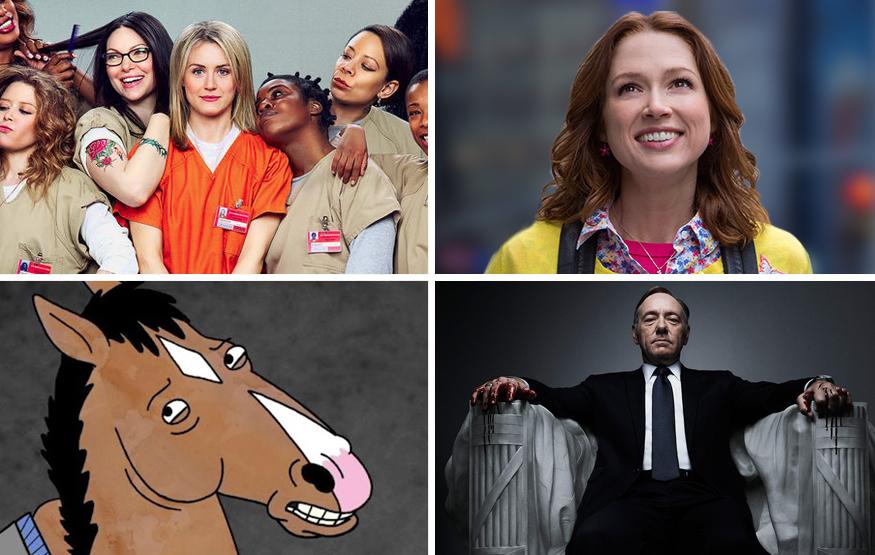 Netflix Originals are easily one of the best reasons to be a Netflix subscriber. While Stan and Presto might be able to go toe-to-toe with content such as James Bond and Marvel blockbusters, neither are able to offer subscribers anything from Netflix's stable of critically acclaimed original content. Here are the Netflix-made programmes that you should watch.

Orange is the New Black
Must Watch

Orange is the New Black, in my opinion, is easily the best show in Netflix's roster of original programming. Teetering back and forward between black comedy and drama, Orange is the New Black follows Piper Chapman, an upper-to-middle class New York woman, sentenced to 15 months in federal prison.

While the show's narrative hones in on Chapman's plight, it's truly is an ensemble production with a whole cast of memorable characters; some will annoy you to no end, some you'll loath and some you'll love. When combined with excellent pacing and compelling stories, Orange is New Black is easily Netflix's most consistent show; I can't remember a single bad episode across its two 13 episode seasons. If you're only going to watch one Netflix Original, make it Orange is the New Black.

House of Cards
Must Watch

House of Cardsis most certainly Netflix's most prolific original. The HBO-esque drama follows the Machiavellian schemes of corrupt politician Frank Underwood and his wife Claire in a vicious fight for the Whitehouse. Played by Kevin Spacey and Robin Wright respectively, the power couple's chemistry alone make the show watching.

The story is a revenge tale of almost insane proportions, kicking off when Frank is passed over for an appointment of Secretary of State. There's a few rough edges, but House of Cards is certainlly compelling, binge-watchable television that goes right up against the best of AMC and HBO's high budget offerings.

Is there a hole in your heart that can only be filled by watching 30 Rock re-runs? There is in mine, but fortunately Tina Fey's new show, Unbreakable Kimmy Schmidt has made it just that little bit smaller.

Kimmy Schmidt has spent the last 15 years of her life living in an underground bunker as part of an apocalypse cult. After she and the three women she was trapped with are rescued, the 29-year old is forced to adjust to a new life in New York City. If the left-of-centre premise doesn't give it away, Unbreakable Kimmy Schmidt provides plenty of Fey's trademark off-beat humour, but it still feels like its own unique show, even though it shares a few actors with 30 Rock.

The Office's Ellie Kemper is wonderful in her role as Kimmy, playing it with a blend of sass and child-like naivety that makes the programme. Much like Orange is the New Black, Unbreakable Kimmy Schmidt is incredible consistent, and in my opinion, the entire first season is amazing top to tail.

I've only watched three episodes of Bloodline so far but the slow-burning drama from creator of Damages has got me hooked. The glacial-paced unravelling of a powerful family with dark secrets makes for hypnotising television; it's like watching a slow-motion train wreck.

Bloodline's plot focuses on three adult siblings from a well-off family in the Florida Keys who must deal with the return of their black sheep of a brother. As is the case with this style of show, nothing is black and white. Much like Damages, Bloodline makes use of non-linear narrative structures, often cross-cutting between present and future (at least from what I've seen so far).

BoJack Horsemanis one of the best black comedies I've seen; it's hilarious, but it also tends to be very dark. For an animated show about a talking horse, there's more than a few episodes where it gets way too real.

The show centres on BoJack, a washed up anthropomorphic horse best known for a lead role in an 80s TV show . While his show was incredibly successful, BoJack hasn’t achieved anything of note since, leaving him bitter and self-loathing.

On top of the outlandish yet brilliant concept, BoJack's cast of characters are voiced by a fantastic cast including Arrested Development's Will Arnett, Breaking Bad's Aaron Paul and Community's Alison Brie. Much like the whisky consumed by the titular horse, BoJack can take a little to grow on you, but after the first three episodes I was in for the entire ride.

Macro Polois Netflix's answer to Game of Thrones; it's an epic dynastical drama about warring families and the pursuit of power. However, unlikeGame of Thrones, Marco Polo is loosely based on history, and as such, forsakes the dragons and zombies. The problem is that it's not exactly an amazing answer.

Marco Poloisn't a bad show, but it's not a great one either. There's plenty to love; I made it through the entire first season and was mostly satisfied. The biggest issue is poor pacing; the show is quite literally all over the shop. The first four episodes move as fast as peak-hour CBD traffic, and are then followed by a mix of episodes that try and move the plot too quickly and episodes that almost don't move it all. To use the driving metaphor again, it's much like an old man who can't keep his foot on the accelerator.

You shouldn’t go out of your way to watch Marco Polo, but if you're stuck inside on a rainy day with nothing else to do, it’s certainly worth a stream. There are some pretty impressively choreographed fight-scenes, some stunning cinematography, and at very the least, you don't have to worry about the author dying before he can finish the books.

What Else
There's plenty more original Netflix programming coming this year, with the team having promised a new show every two-and-a-half weeks for 2015. Marvel's Daredevil launches on April 10, and the Wachowski's Sense8 is scheduled to premiere on June 5. We'll also be seeing new seasons of Orange is the New Black, BoJack Horseman and Marco Polo later this year.