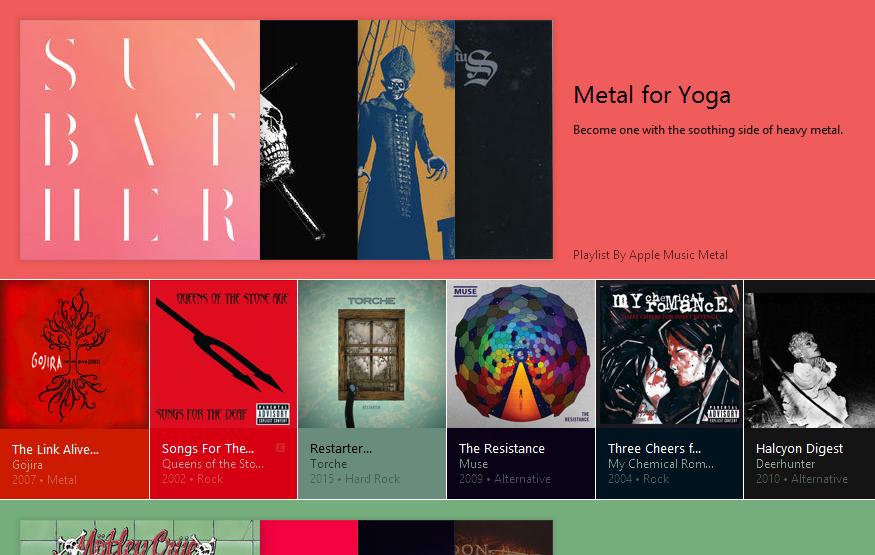 Apple Music has been available for almost two weeks now, and it's proved to be a solid alternative to the likes of Spotify and Rdio. While Apple Music feels bound by the conventions of other streaming services on the market, I've been impressed with both its playlist curation (despite someone odd names "Off Your Ass & Cut the Grass – Metal motivation for lashing out at your lawn") as well as the Beats 1 radio show.

All in all, Apple Music is good enough, but I've got a few reservations. There's a couple of issues Apple needs to address before it can sway me away from Rdio.

Beats 1
The idea of an online radio station isn't new, but Apple has gone above and beyond with Beats 1. In addition to an all-star line-up of DJs, Apple has managed to secure weekly guest shows helmed by likes of Queens of the Stone Age's Josh Homme, Elton John, Run the Jewels, Pharrell, and Drake.

The problem is, you can only listen to these at their time of broadcast.

Sure, you can go back and listen to playlists from past shows, but there's no way to actually catch up on an entire show. The music is important, but when you've got hosts like Elton John and Josh Homme, I'd argue that the banter is just as important, if not more.

When you consider Beats 1's online nature, the fact that Apple doesn't offer post-show podcasts is a bit of an odd choice. I want to keep listening to Josh Homme's Alligator Hour, but I'm not always going to be able to tune in at 12pm on a Thursday.

iCloud
Apple Music's ability to mirror your iTunes library in the cloud is great in theory, but a little problematic in practice. Enabling "iCloud Music Library" removes your ability to manually sync music to your iPhone or iPad, can cause issues with tagging and album art, and can result in "explicit" versions of songs being replaced with the "clean".

For me, losing the ability to sync manually is almost a deal-breaker. Sure, there's a certain convenience to having all of your music in "in the cloud", but sometimes I really just want to quickly copy an album across to my phone without having to rely on data. The bigger issue is that music synced to your device via iCloud is encoded in Apple's DRM (digital rights management), rendering it unplayable in other apps. This is a major problem if you want to listen to your music in any other app, such as the Sonos companion app.

At the moment, I've lost the ability to play music I own (and didn't buy through Apple) via my Sonos speakers because of DRM and Apple's insistence that you have to sync through the cloud. Sure, I could disable iCloud Music Library and sync manually, but it shouldn't be that complicated. If I own the music outside of Apple's streaming service, there's no reason Apple should be adding DRM to it.

Sonos will be adding Apple Music support in coming months, but the fact Apple has broken something that used to work almost flawlessly isn't brilliant.

User Interface
Apple is often on point when it comes to user interface design (at least now that it's killed skeuomorphism), but Apple Music comes across as a little confusing at times. The Apple Music interface works well enough, especially after you get used to it, but it's not quite as friendly as Rdio or Spotify. Finding past Beats 1 shows isn't exactly obvious, settings are split between the Music app and iPhone settings, and it's not always clear whether or not you can interact with something or not.

Obscurity
So this will probably sound more than a little pretentious and / or demanding, but I'd love it if Apple dug a little deeper when it came to its playlists and recommendations. I've enjoyed the playlists I've listened to, but I haven't really found anything new via them. Show me recommendations from artists I've never heard of in the "inspired by Black Sabbath" playlist rather than Kyuss and Electric Wizard.

Maybe Apple Music just needs a bit more time to learn about me and my music taste, but I wish it would introduce me to new music, rather than recommending me things that are already in my iTunes library. Since I've enabled "iCloud Music Library", Apple knows exactly what I've got stored in iTunes, and could easily use this information for smarter recommendations.

If you're going to break manual syncing, better recommendations are the least you can do.