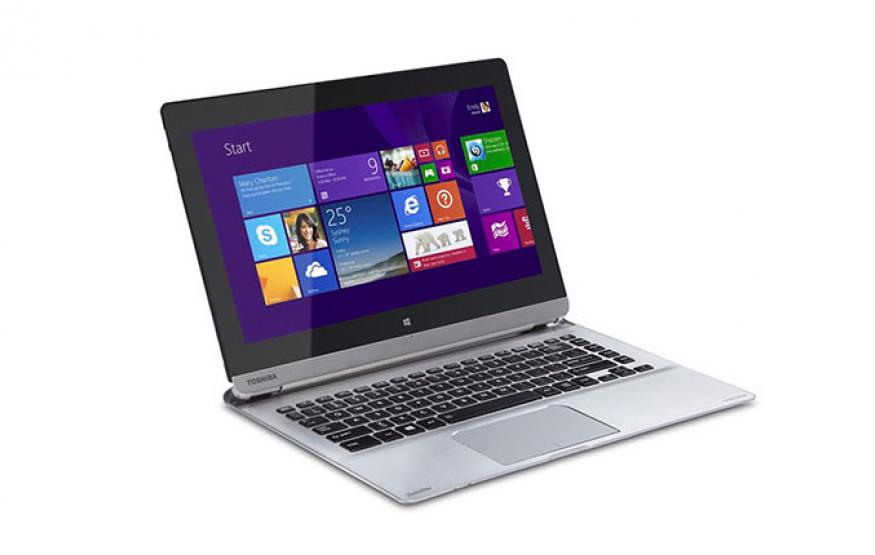 The Toshiba Satellite P30W is one of Toshiba's upcoming 2-in-1 devices, due to be released in July. I was able to sneak a peak and get an early hands on this stunning device when it wasn't too busy being pampered on set for next weekend's episode of CyberShack.

The Toshiba Satellite P30W is one of Toshiba's upcoming 2-in-1 devices, due to be released in July. I was able to sneak a peak and get an early hands on this stunning device when it wasn't too busy being pampered on set for next weekend's episode of CyberShack.

The beautiful designed 13.3" Ultrabook 2-in-1boasts a Intel Core i5 Haswell processor, 4 gigabytes of RAM, a 128 gigabyte solid state drive, and a simply gorgeous 1080p display. The super sharp screen has a pixel density of approximately 160 pixels per inch, making it a medium density panel. When compared to my 22" 1080p monitors, the difference in sharpness is astounding.

The P30W 's keyboard is for the most part, a glorified dock. It features power input, two USB 3.0 ports, SD card slot and a HDMI input. The keyboard felt quite weighty and solid, but despite this, the tablet portion had a bit of wiggle to it. But to be fair, given the majority of the internals reside in the tablet, this is somewhat unsurprising.

Pushing down on the screen releases the P30W from the keyboard. When I first took it out, I was pleasantly surprised to find  a second power input, an extra USB port (although USB 2.0), a Micro SD card reader, and a Micro HDMI slot. What this means is that if you’re mostly using the P30W as a tablet, you have no need to carry the keyboard around – it is just as functional with or without it.

While the device weighs about 2 kilograms, I was a bit blown away by just how light the tablet portion of the 2-in-1 was. Even at 13" inches, it felt lighter than either the iPad 3 or 4.  I was able to comfortable hold it without feeling strained (which is actually the reason I swapped my iPad 3 for an iPad Mini when they were released). For a full fledged, full sized Windows machine, this is seriously impressive.

Overall, I was quite impressed by the Toshiba Satellite P30W, and wish I had a little bit more time to play with it. Not only does it look like a formidable competitor to the upcoming Surface Pro 3, it could very well sway some away from their iPads and Android tablets.

We'll hope to have a full review of the Toshiba P30W before it's launch in July.

Previous Post App Feature: 3D Printing and Designing Apps
Next Post 3D Printers That You Can Actually Buy For Your 3D Printing Projects