Can you actually cut through a watermelon with a smartphone? 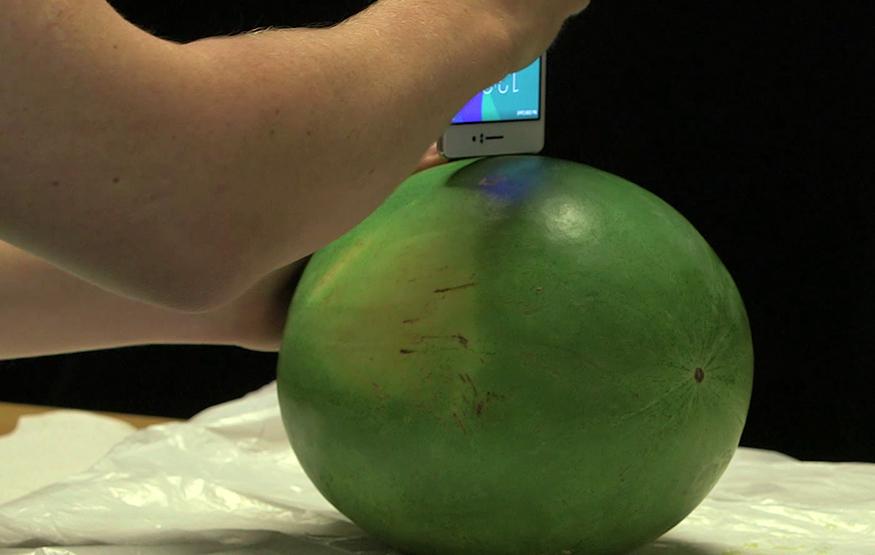 Chinese smartphone manufacturer OPPO recently brought what used to be "the world's thinnest phone" (it was beaten by 0.1mm) to Australia, the OPPO R5. Aside from making claims in regards to the R5's slim stature, OPPO has also boasted about the handset's durability – an apparent retort to countless questions of "will it bend?".  This has included sharing videos of the R5 being used as a bottle opener, slicing open a watermelon and being run over by a car, among other things.

These are pretty impressive claims, so we wanted to put them to the test. OPPO Australia was confident enough in its phone that it sent us a unit we could inflict some punishment upon. While we didn't go quite as far as running the R5 over, we smashed up an Apple, sliced through a watermelon and cracked open a bottle of beer.

In terms of external damage, opening the beer resulted in some fairly superficial scratches on the R5's back. Our assault on the watermelon and apple did however result in some moisture damage. This reduced the speaker's volume levels, and fogged up the back and front cameras. We tried remedying by leaving the R5 in a bag of rice overnight. This fixed the rear facing camera, which now works as out of the box, but didn't repair the front-facing camera or speaker. Otherwise, the phone's functionality hasn't been affected.

Much like a witch, the R5 is tough but cannot hold up to water – or indeed – watermelon. It's also possible the sheer blunt force affected the internals (keeping in mind that the force used would have easily done external damage to other handsets, which it didn't to the R5), rather than the stray fruit juice. However, in this scenario it seems like juice is the more likely culprit.

Overall, I'm pretty impressed how the OPPO R5 held up. I certainly wouldn't be game enough to try these tests with most other phones, especially the iPhone 6. While I don't recommend trying this at home, I'm extremely confident in the R5's durability; it looks like damaging it in any serious way would take quite a bit of punishment. At the very least, you know it won't bend.

If you're prone to breaking your phone, the R5 is definitely worth considering. Here's our review.