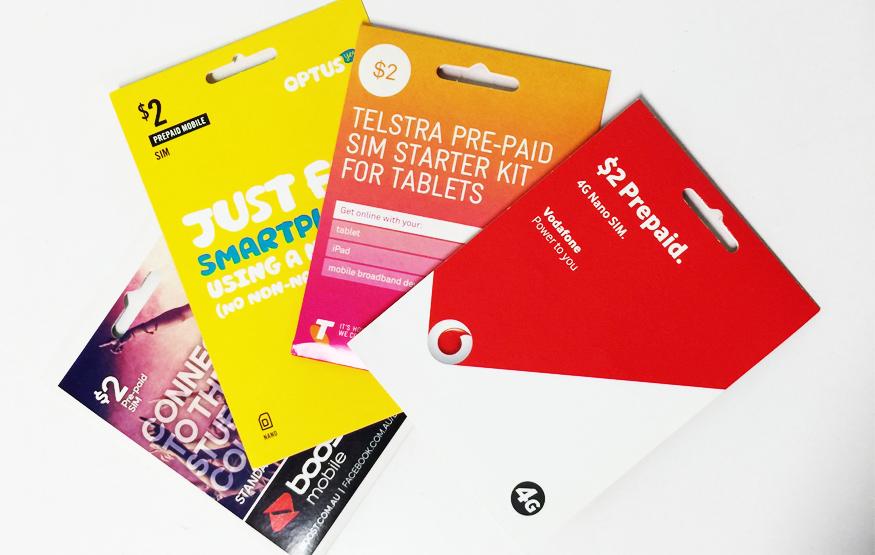 The main reason we tie ourselves to two year contracts with a telco is the free phone. Well, it's not quite free, but it feels it when compared to the alternative of buying an AUD$1,000 device outright. Fortunately, cheaper handsets are now better than ever before, with devices like the Microsoft Lumia 640 and Alcatel Idol 3 providing a compelling argument against just going out and buying the latest flagship of your choice. Priced at around AUD$300, the cost of these devices is much more palatable as an outright purchase.

If you buy one of the new budget devices outright, there's no need to shackle yourself to a telco for two years. As such, it's definitely worth considering the flexibility offered by pre-paid plans.

Telstra
Telstra's pre-paid plans are a mixed bag. At AUD$30, the telco has a reasonable offer that includes 1.3GB of data and AUD$250 of talk and text. It's not a huge amount, but it's comparable to what the other players offer for the same price. The big benefits of being with Telstra are better regional coverage and a faster network. Optus has definitely improved its regional offering, but I've always had more consistent results with Telstra when outside of capital cities.

Once you start looking at Telstra's AUD$40 and AUD$50 plans, the telco's offerings become a lot less competitive. These offer 2GB and 2.5GB of data respectively, less than half of what operators such as Amaysim offer at a similar price.

In terms of bonuses, Telstra is offering new pre-paid customers three months of Presto for free. The promotion expires May 25. Customers can also pick either the Anytime Bonus (unlimited calls to Telstra mobiles, unlimited text to Australia numbers) or the Night Bonus (unlimited talk and text between 6pm and 6am).

Optus last year introduce AUD$1 a day pre-paid, a system where you're only billed for the days when you use your inclusions (receiving phone calls and messages doesn't count). If you don't touch your phone on any given day, you won't be billed for that day. If you end up using your phone every day, you're getting slightly less value than Optus' regular recharge options, but not massively so (1.2GB vs 1.5GB, for example). Daily pre-paid does however restrict the amount of data you can use in a day as part of the allocations (after 40MB, you're billed AUD$1.50 for the day and given 80MB instead), meaning you lose a bit of flexibility.

Vodafone
Vodafone's pre-paid options are all quite reasonably priced, but don't have the same bang per buck when compared to what Amaysim and Optus are currently offering. Included data, for example, falls short on Vodafone's three main tiers – AUD$30, AUD$40 and AUD$50 – where the telco only offers 1GB, 2GB and 3GB respectively. Recharging online nets you a bonus 250MB on the AUD$30 plan, and 500MB on the other two.

However, Vodafone pre-paid sets itself apart with what the telco calls "free weekends", allowing customers to use unlimited data and make unlimited standard international calls to certain countries on Saturday and Sunday. The free weekends promotion was meant to end in April, but Vodafone has extended it to August. Personally, my data usage mostly happens during the week, but the offer's sure to appeal to some.

Virgin Mobile
Virgin Mobile easily has Australia's worst pre-paid offering. We're becoming more and more reliant on data, but no plan offers more than a gigabyte. An AUD$99 recharge might give you AUD$1,850 of talk and text credit, but still only includes a paltry 1GB of data. Adding insult to injury, excess data is billed at approximately AUD$2 per megabyte.

There's simply no reason to use Virgin pre-paid.

Amaysim
Amaysim's 4G plans currently offer the best bang for buck out of any Australian pre-paid provider; AUD$44.90 gets you 5GB of data and unlimited talk and text. If you want more, AUD$59.90 will take that to a massive 7GB of monthly data. An AUD$29.90 option is also available, with 2GB data and 500 minutes for standard calls. Extra data is available at AUD$10 per gigabyte.

If you're not using your phone every day (and aren't making too many calls), Amaysim's As You Go plan could be worth considering. Standard calls are billed at 12 cents per minute, messages as 12 cents per text and data at 7.2 cents per megabyte. Data packs can be added to the As You Go plan starting at AUD$9.90 for 1GB; I'd definitely recommend adding one, as otherwise you run the risk of racking up a massive bill if an app decides to update itself while you're on the go, for example.

Boost
Boost is powered by Telstra's 3G network, and unlike the rest of the telcos listed here, does not have a 4G option. Personally, I wouldn't use it for that reason alone, but I can appreciate that not everyone needs the speeds offered by 4G.

In terms of data inclusions, Boost offers 1GB with an AUD$20 recharge, and you'll also get an additional 500MB to use every Sunday (it expires once Sunday is over). You only get 100 minutes of talk time, but does anyone still actually use their phone to make calls?

If you don't care about 4G, Boost is the best choice for a budget plan; every other telco chargers a minimum of AUD$30 for a 30 day recharge.

Boost also has an AUD$40 plan, offering 3GB of data (with 1GB bonus on Sundays), unlimited talk and unlimited text. This edges out Vodafone and Optus in terms of inclusion value, but you're losing 4G.

The Verdict
Unless you're after inclusions such as international calling, Amaysim is easily the best value pre-paid provider in Australia at the moment. The telco's AUD$44.90 will be the sweet spot for most users, but Amaysim still takes the cake when you look at both its higher and lower tiers.