Australian Review: Toshiba Portégé Z20t – Living up to the hype 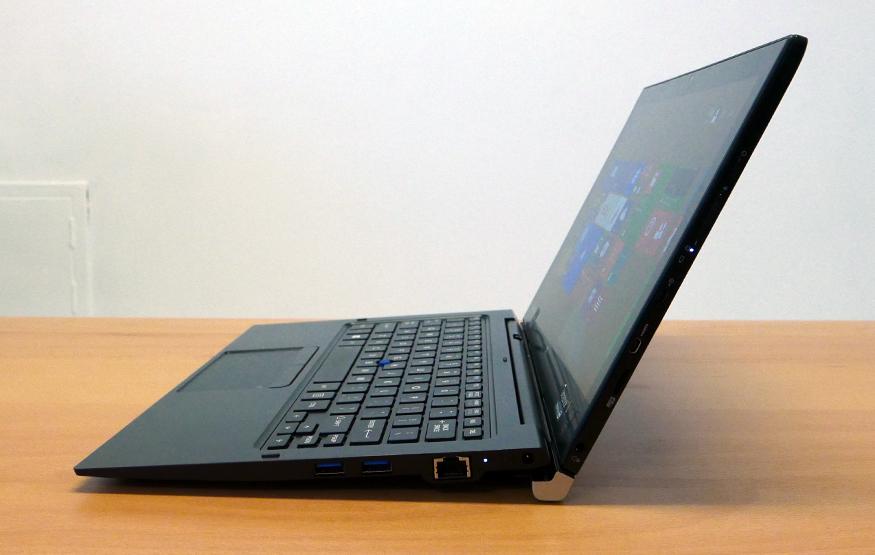 Performance & Battery
Powered by Intel's new Core M processor, the Portégé Z20t is capable of modest performance. It's not quite the power you'd get from a laptop running a Core i5 processor, but it's more than enough for work, emails, web browsing, high definition video playback and a bit of photo editing.

The biggest advantage of the Portégé Z20t's Core M processor is a huge battery life. I was able to get about 13 to 14 hours of battery life (based on mixed usage including several hours of video playback at 75% brightness) out of the two-in-one, which is easily the best out-of-the-box battery life I've seen on a notebook so far. Toshiba achieved this through packing a second battery into the keyboard dock, in addition to the battery inside the tablet component of the Z20t. As an individual component, I got about seven hours of battery from just the tablet, but when plugged in, this essentially doubles.

If you're plugged into the keyboard, the dock's battery will drain first, meaning you can keep using the tablet as a standalone device when the dock runs dry. Similarly, the tablet also charges before the dock. A complete recharge of the Portégé Z20t's two batteries took about four hours.

While the Core M processor allows the Portégé Z20t to boast a fanless design, this means the device can run quite warm, even when doing basic tasks. When I was using the Portégé Z20t as a tablet to test out the stylus, I found it heated up when the only app I had open was Word, and got even warmer with more intensive programs. It didn't get to the point where it was too hot to hold, but the heat was definitely noticeable. If you're using the Portégé Z20t as a notebook, this shouldn't be a problem.

Out of the box, the Portégé Z20t ships with a little too bundled software for my liking. This means most users will probably want to spend an hour or sleeping up the device, removing unnecessary applications such as Norton Internet Security (and turning Windows Security back on, or installing a better program) and

Windows 8.1 still isn't a great operating for touchscreen devices, but Windows 10 looks like will address many of its issues thanks to features like continuum that will make going between notebook mode and tablet mode a little more seamless. Portégé Z20t owners will be entitled to a free upgrade to Windows 10.

Final Thoughts
Despite being aimed at the business market, the Toshiba Portégé Z20t is a great all-round laptop that can fit into a home or classroom just as well as an office. The only things holding the Portégé Z20t from being a must-have notebook is the fairly high price tag and lacklustre trackpad. Starting at AUD$1672, you'll be spending Surface Pro 3 money on the Portégé Z20t. Thanks to your choice of i5 or i7 processors, the comparative Surface Pro 3 models are more capable than Toshiba's latest offering on paper, but the Z20t runs rings around them in terms of battery life and makes a better laptop thanks to its more ridged keyboard.

The Portégé Z20t is a much better laptop than it is a tablet. Part of this comes down to the issues with Windows 8.1 on touchscreen devices, whereas the rest comes down to the fact a widescreen aspect ratio just isn't great for tablet computing. Despite this, the Portégé Z20t is an excellent device overall, and worth buying even if you have no intention to use the tablet functionality.

I'd love to see more devices like the Portégé Z20t come to market. In a world where manufacturers emphasise "hot and skinny", it's great to see Toshiba make a two-in-one that bucks the trend and give us more instead of less.