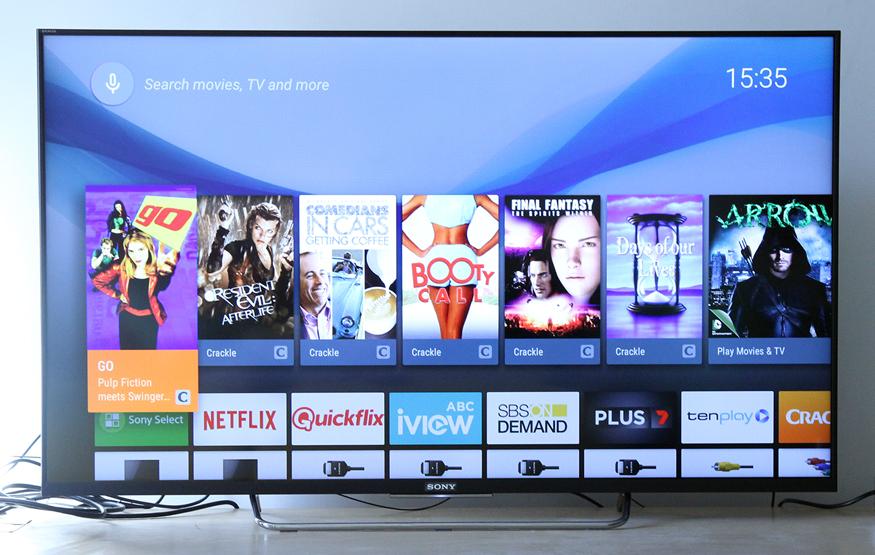 Android TV
If you're familiar with Lollipop, Android TV won't be a big surprise – aesthetically, it makes use of the same Material Design aesthetic you'll find in the latest version of Google's operating system. It's flat, it's clean, it's reasonably minimal. Despite the visual similarities, you don't have to come from an Android background to get the hang of Android TV; you might already be familiar with some of the apps and iconography, but that's the only real advantage you get.

Android TV is a very different beast compared to its smartphone-based namesake – and so it should be, using a phone is a fundamentally different experience to using a TV, and both have very different purposes. The interface is big, bold and image heavy. At first, this can result in a bit of scrolling to the find the apps you want to use, but the operating system tends to group them by how recently you've opened them. With the exception of a few minor quirks (which I'll get into a little later) Android TV is reasonably easy to get the hang of.

Of course, if you are an Android owner, you do get some advantages. Movies, music and TV you've purchased via Google Play is all accessible, as are any apps that have an Android TV version – such as Crossy Road, for example.

On the subject of apps, you've got the usual culprits baked in – Netflix (there's even a big Netflix button on the remote), YouTube, Play Movies, and Play Music – alongside local catch-up apps for ABC, SBS, Nine, Seven and Ten.