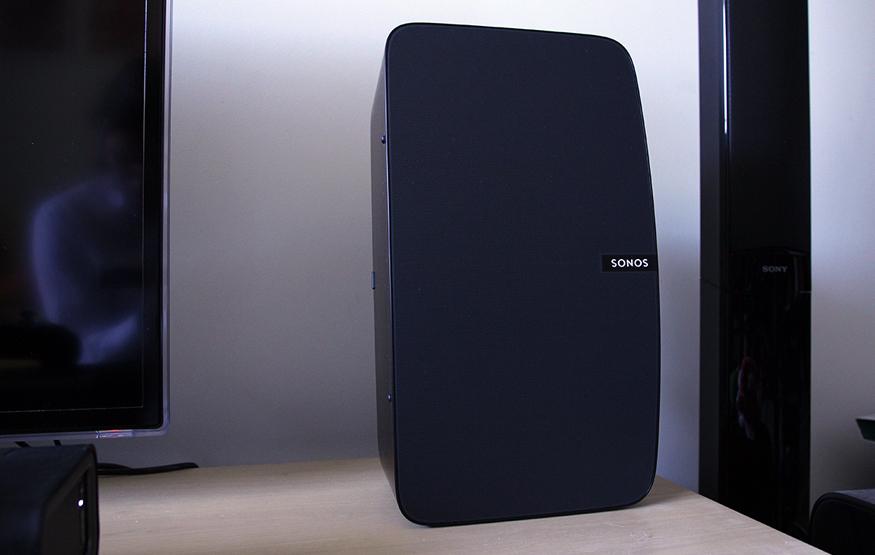 Much like the Play:1, the new Play:5 is now humidity resistant, which means you can safely keep it in a bathroom or high moisture environment. It's not actually waterproof though, so don't take it in the shower.

Setting up the new Play:5 is easier than ever. Simply plug in the speaker, open the app, press a button on the back of it, and run a short software update. It worked perfectly right out of the box, and the entire process took a matter of minutes. During setup you're also presented with the option to use "Trueplay" to tune the speaker to your room, but you're always able to skip this and return to this setting later.

As is the norm with Sonos speakers, the only way to get the new Play:5 to play music is via Sonos' dedicated controller app (available on iOS, Android, PC, and Mac). Thankfully, it's a very good app, but more on that later. This does however limit the new Play:5's versatility; there's no way to pair a phone or tablet to it directly, via Bluetooth, for example. You are however able to connect legacy devices via line-in, but you'll still need to use the app to set the audio source.

In terms of sound quality, the new Play:5 is fuller, richer and louder than its last iteration. There's a noticeable improvement, but it's not the kind of improvement that's going to make existing Play:5 owners run out and upgrade based on acoustics alone.

The new Play:5 is crystal clear, and packs a surprising amount of punch. Once you get past the 50% mark on the volume slider, you're looking options that range from "noise complaint loud" to "get evicted loud", at least if you're an apartment dweller like myself. Impressively, the speaker didn't exhibit any noticeable distortion, even when maxed out.

As with Sonos' other speakers, the new Play:5 has a fairly neutral sound palate out of the box, equally favouring both bass and treble. I couldn't find a track that wasn't done justice, whether it was saccharine bubble-gum pop, blackened folk metal, dank EDM beats, or saxed-up hip-hop. If you want to tweak further, you can dial up or dial down both the bass and treble until it matches your tastes. While the bass loses a bit of oomph when you're listening at lower volumes, there's a new "Loudness" mode that you can switch on within the Sonos app that will counter balance this.

The new Play:5 utilises side-firing tweeters to try and create the illusion of stereo separation. While it's no substitute for a two speaker setup, it's a big step up over the old model. This also helps create a sense of scale or "wideness", increasing the "listening angle", for the lack of a better phrase. If you're not looking at the new Play:5, it's very easy to believe there's more than one speaker at work. I made that mistake myself the first time I heard it.

Trueplay further tweaks the new Play:5's sound, and adjusts  its for the room you in. After about 45 of seconds waving your phone around your room while doing a silly walk, the new Play:5 will utilise sound profile that's said to be optimised for your environment. Depending on where you've got the speaker, you might not actually notice a change.

When I had the new Play:5 sitting on a wooden cabinet, the Trueplay calibration reigned in the Play:5's bass frequencies. This reduced some of the deeper, boomy echoes created due to the fact the cabinet is mostly hollow.

Trueplay will also be also available on the Play:1, Play:3, and old Play:5.