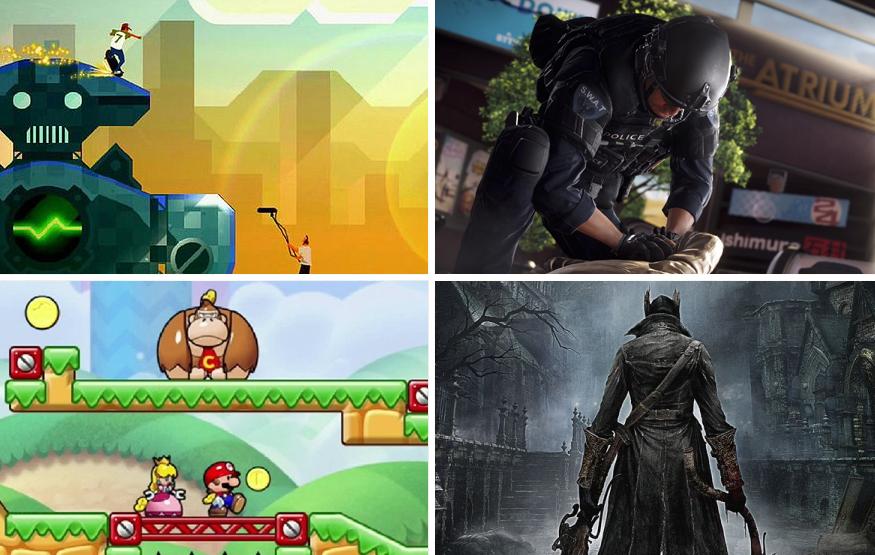 March is still a bit of a slow month when it comes to new releases, but there's some big titles to out for, especially towards the end of the month! Personally, I can't wait to get my hands on Bloodborne. The only problem is Pillars of Eternity is out the day after…

OlliOlli 2: Welcome to Olliwood is the sequel to the devilishly addictive OlliOlli, a skateboarding sidescroller. The core gameplay involves executing tricks with a simple control scheme while trying to make perfect landings in an endless quest for high scores. OlliOlli 2 expands on the formula with a new combo system and split-path levels.

Screamride, built by the developer of RollerCoaster Tycoon, is kind of three games in one; each of the title's gameplay modes have a completely different feel to them. Engineering mode highlights the developer's past, tasking you with building rollercoasters to certain specifications or to achieve a certain goal. Screamrider mode is almost Mario Kart-esque, asking you to hoon around various coasters in under a certain time. The last mode, Demolitions Expert, is almost like a 3D version of Angry Birds, asking you to do as much damage as you can with a giant catapult or rollercoaster.

Hardline mixes up the Battlefield formula, shifting focus away from military into a hyper-violent version of "cops and robbers". Matching the theme, Hardline features several new game modes including Heist, where criminals must break into a cash-filled vault before the police stop them, and Rescue, where cops are tasked with rescuing hostages held by the criminals.

Tipping Stars is the latest instalment in the Mario vs. Donkey Kong puzzler series, and is Nintendo's first cross-buy title. If you buy it on the Wii U, you'll also have it on 3DS and vice-versa. As with past titles, players are tasked with guiding Mini Marios to the end of levels through the use of objects such as girders, springs and pipes in an almost Lemmings like fashion.

Bloodborne is probably the title I'm most excited about on this list. Partly because it's one of the closest to actually being released, and partly because Dark Souls II was one of my most played games of 2014, and easily one of my favourites. Bloodborne is a new title from the studio behind Dark Souls that could arguably be called a spiritual successor to the franchise. It features a similar aesthetic and core gameplay, but with faster paced combat that requires a more offensive approach due the lack of shields, and what seems to be a larger focus on melee.

Pillars of Eternity is an isometric, fantasy roleplaying game in the style of Baldur's Gate and Planescape: Torment that promises to update the much-loved gameplay to modern standards. The title was at one stage Kickstarter's most funded videogame, beating Double Fine's Broken Age, but later surpassed by Torment: Tides of Numenera.