3D Touch is the new right click, and that’s bigger than it sounds 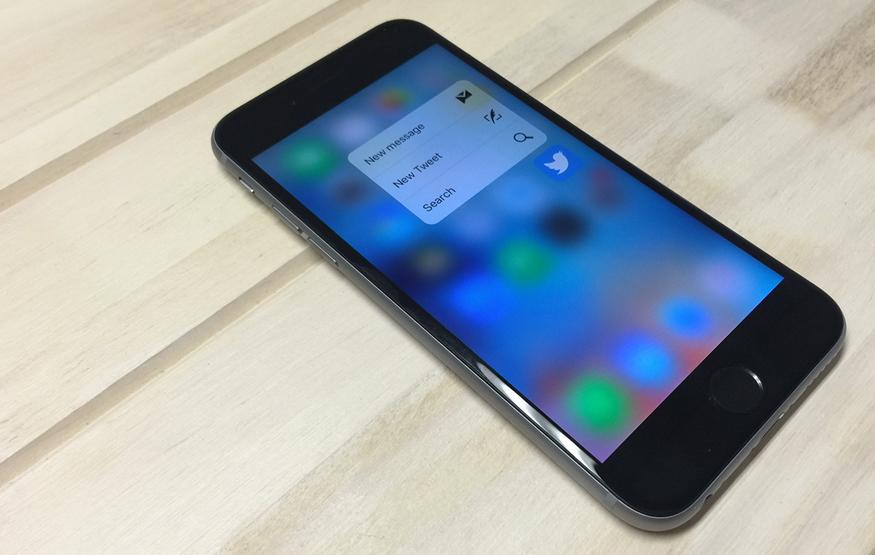 3D Touch is essentially right click for smartphones, and that's a bigger deal than it sounds. In fact, 3D Touch could easily be the most meaningful feature added to a smartphone in years.

In a way, it feels like we’ve hit "peak smartphone". Smartphone design seems to have reached its pinnacle, and we’re seeing less genuinely innovative changes as part of each yearly upgrade cycles. We’ll keep getting better screens and faster processor, but the core product is virtually the same.

Staving off "peak smartphone" is important for a company like Apple, who makes its money selling a premium product. When a budget or midrange smartphone is doing the same task as a high-end device with a much larger price tag, it can be hard to justify the purchase. Thankfully for Apple, 3D Touch is the kind of feature that shows it can still innovate, and that there’s still a tangible benefit to buying a flagship phone.

For those who haven't been following (or been intentionally ignoring) the deluge of Apple news these last few weeks, 3D Touch is the more-than-a-little-awkward name Apple has given its depth sensing screen technology found in the iPhone 6s and iPhone 6s Plus. 3D Touch means the iPhone knows how hard you're pressing on it. The screen and software are capable of distinguishing between three different pressure levels: a light tap, a medium push, and a hard press.

For example, if you've received a text message asking if you'd like to come over to watch Netflix and chill at 7pm, you can push down on the time to bring up an overlay of your calendar for the day. Pushing down harder will actually open the calendar app. Similar functionality is available in the Mail app, where pressing down on an email will bring up a preview, and pushing harder will open it. Apple refers to this functionality as "peak" and "pop".

On the home screen, 3D Touching compatible app reveals a secondary menu similar to what you get when you right click an icon on a PC or Mac. The menus expose a variety of functionality that helps you jump straight to where you want to go in an app. 3D Touching the camera lets you go straight into selfie or slow-motion mode. 3D Touching the Calendar will show you your next appointment. 3D Touching the music app will start playing Beats One or the most recent track you were listening to. 3D Touching the phone icon brings up recent contacts.

Importantly, these tasks can be all done in one action. After pressing down on the app icon, you can just swipe up or down to the option you want without the need for a second tap. After you've gotten familiar with this, it becomes stupidly efficient.

In terms of third party apps, Instagram has utilised 3D Touch incredibly well. If you’re hunting down a certain photo in search results or on someone's profile, say, a particularly funny "Text from Malcom", you can push down on the thumbnail to bring up a larger version. It seems simple, but it works well and makes Instagram feel a little leaner.

So why is this meaningful? In general, I see saving time as being the primary purpose of computers. It's much more time efficient to write a letter in Word than to scrawl it out on paper. It's faster to send an email than to mail a letter. It's easier to Skype someone on the other side of the world than to travel there. Computers are capable of simplifying complex tasks and turning them into something convenient.

Think about how many times you right click a day. If you're like me, it's probably a couple of hundred. It makes using a computer a lot faster. I used to dread using a Mac back in the days of the one button mouse; it was weird. Thankfully, Apple eventually relented and made a two-button mouse. Right click is important.

Much like right click, if you embrace 3D Touch, it speeds up the iPhone experience in a very different way to a simple processor upgrade.

In the long run, I can also see 3D Touch facilitating more complicated smartphone apps. While not everyone needs this kind of functionality of their phone, I imagine 3D Touch would greatly benefit mobile applications such as Garage Band, iMovie and the Microsoft Office Suite, and bring them just a little bit closer to their desktop counterparts.

While 3D Touch is easily one of the most exciting features I've seen added to a smartphone, it's not all sunshine and roses. There is a bit of learning curve in terms of working out how much pressure you need to apply, and a bit of trial and error in finding out what is actually 3D Touch-able.

Even after using an Apple Watch for the better part of six months, I still needed a bit of practice. It took my non-Apple Watch touting colleagues even longer. At first, I was worried about pressing down too hard, out of fear of breaking the phone. After ten years of gentle touchscreen taps, it’s a big change.

In a way, it reminds me of using the iPhone's keyboard for the first time. Typing on a touchscreen just felt weird and imprecise, I wanted to go back to my stylus-driven Windows Mobile clunkatron. Now it's second nature.

I'm not sure if we're going to see a smartphone that deviates significantly from "rectangle with a screen" mould in the foreseeable future, but it's refreshing to see a new technology that is more than just a gimmick. I can't wait to see how developers takes advantage of 3D Touch.

So is 3D Touch alone worth buying a new iPhone for? Not really, especially if you're already on an iPhone 6. It's still early days for 3D Touch and the handful of apps that make use of it, but it's a surprisingly efficient tool. In the future, 3D Touch will almost certainly become a core part of the iOS experience in the same way pinch-to-zoom. For now, it's a handy, meaningful time saver across the few apps that use it.

CyberShack would like to thank Telstra for providing an iPhone 6s loan unit for this story. Telstra's range of iPhone 6s and iPhone 6s Plus plans can be found here.

Previous Post Huawei Watch available in Australia from October 15
Next Post Three’s a crowd: Hands on with The Legend of Zelda: Tri Force Heroes